Learn more
Size750mL Proof91.6 (45.8% ABV) *Please note that the ABV of this bottle may vary
Aged for a minimum of 18 years, this whisky was rated "Best Whisky in the World" at the World Whiskies Awards in 2007. 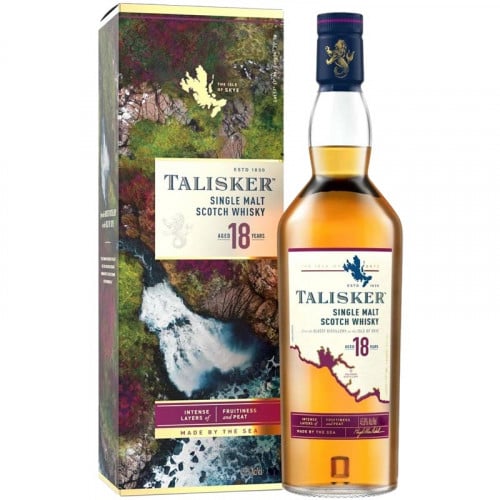 Following distillation, Talisker 18 Year Old Single Malt Scotch Whisky is matured in traditional oak casks for a minimum of 18 years. As a result, the whisky has a bold aroma, with notes of toffee, espresso, maple syrup and peat smoke. The aroma gives way to notes of honeyed nuts, orange zest, citrus and rock candy, and leads to a finish accented by hints of tobacco and leather.

Talisker 18 Year Old Single Malt Scotch Whisky earned a score of 93 points from Whisky Advocate and 90-95 points from Wine Enthusiast. It was also rated the "Best Whisky in the World" at the World Whiskies Awards in 2007.

"Making Talisker demands long hours and no compromises, so I tour the distillery several times a day making sure no part of the process betrays the rest," says Lochhead.

3.9 out of 5
(4 reviews)
Write a review
Real email address is required to social networks
Sign in
Login with Google
Login with Facebook
Or
We also recommend