Caskers Rewards members earn up to 7 store points back when buying this bottle.
Size750mL Proof110.2 (55.1% ABV)
Part of the Diageo's 2020 Special Release, this is the first ever Singleton of Dufftown to be matured exclusively in refill American oak, ex-bourbon hogsheads. Exceptionally smooth and creamy.
Notify me when this product is back in stock.

Caskers Rewards Caskers Rewards members earn up to 7 store points back when buying this bottle. Learn more
Out of stock
Skip to the end of the images gallery 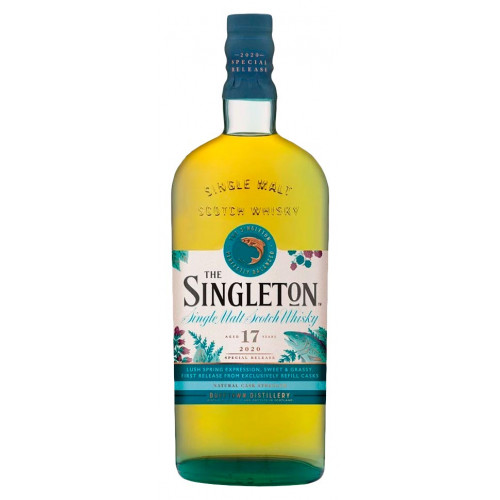 About The Singleton of Dufftown 17 Year Old 2020 Special Release

The Singleton brand is actually manufactured in three Scottish Whisky distilleries, one of which is Dufftown. Situated in the iconic Speyside region of Scotland, the Dufftown Distillery was founded in 1895 by four wine merchants who together purchased a stone built saw and meal mill and converted it into a distillery. Located near the confluence of the Rivers Dullan and Fiddich, the distillery draws its water from Jock's Well, which is renown for its incredibly pure and flavorful spring water (on more than one occasion, nearby distilleries — particularly Mortlach — have been caught attempting to divert water from the well to their own distillery).

Part of the Diageo's 2020 Special Release, Singleton of Dufftown 17YO is one of eight single malt Scotch whiskies in the collection. A creamy single malt and the first ever Singleton of Dufftown to be matured exclusively in refill American oak, ex-bourbon hogsheads, it was crafted by master blender Dr. Craig Wilson, respecting the year's theme "Rare by Nature". Bottled at natural cask strength of 55.1% ABV and made from 100% malted barley, this special release is a lush spring expression with sweet and grassy notes that’s at the same time spicy, but elegant. Its extremely creamy texture and sweet palate ends with soft oak spices and herbal notes. An excellent, classic malt whisky, available in very limited quantities.

A mild nose with subtle tones of honeycomb. The palate is creamy and sweet, bringing forward grassy and fruity elements. The finish is long with a spicy aftertaste.