This product is available in: CA, DC, NY, ND, WA Unfortunately, we can't ship to PO Boxes and APO addresses.

Size750mL Proof92 (46% ABV)
As blender for over 40 years, GlenAllachie Master Distiller Billy Walker worked meticulously across 16 warehouses to hand-select a limited number of casks to be released as this 18yo.
Notify me when this product is back in stock.

This product is available in: CA, DC, NY, ND, WA Unfortunately, we can't ship to PO Boxes and APO addresses. 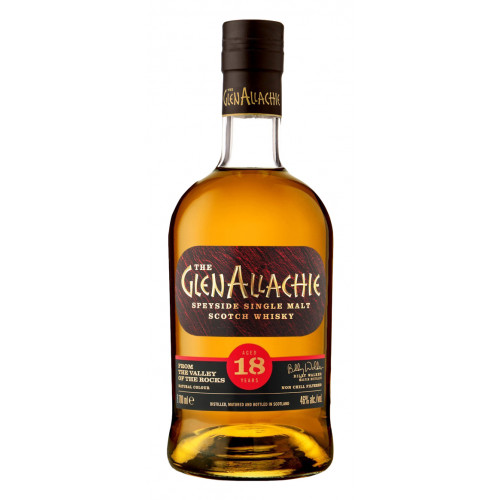 Master Distiller Billy Walker uses a vast amount of aged stock that was obtained along with the distillery, dating back as far as the 1970s. This stock has been slowly distilled from Scottish barley, using 120-hour fermentation. As blender for over 40 years, Walker worked meticulously across 16 warehouses to hand-select a limited number of casks to be released as GlenAllachie 18yo. With its rich, robust spirit in harmony with the heather and butterscotch notes this signature GlenAllachie earned a Double Gold San Francisco World Spirits Competition in 2019.

Fresh vanilla on the nose with notes of toffee, butterscotch and spices. On the palate are flavors of raisins, marzipan, heather and honey, with rich notes of dark cherries, spices and subtle hints of dark chocolate.