Learn more
Size750mL Proof92 (46% ABV) *Please note that the ABV of this bottle may vary
Benriach's older expressions start with the 21-year-old. These feature 4-cask maturation: A combination of ex-bourbon, sherry, virgin oak, and Bordeaux wine casks were used for this single malt that was crafted by Master Blender Rachel Barrie.
Notify me when this product is back in stock. 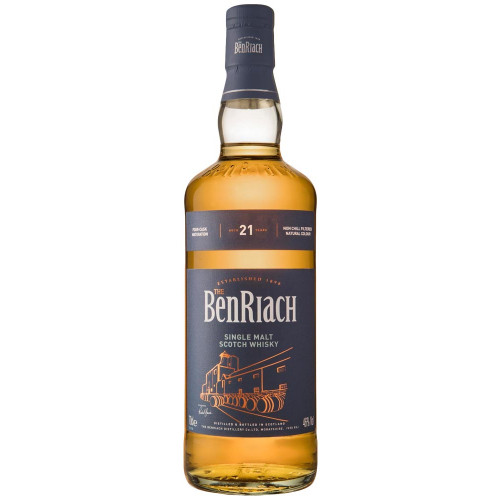 But the 1960s were good to Benriach as well as the entire industry, and the facility remained operational from 1965 onwards. In 2004 the distillery was bought out by a private entity who released a true Benriach single malt whisky. The distillery eventually fell under the ownership of The BenRiach Distilling Co. which also took (befittingly) the Glendronach and Glenglassaugh distilleries under its umbrella. Under the guidance of former blender Billy Walker, the floor maltings reopened in 2013, and distillery production resumed with full throttle. The distillery was acquired by Brown-Forman in 2016. They now produce up to 2.8 million liters per year. Fruit defines the heart of Benriach's character, specifically, distinct notes of pears and peaches.

It's with the Benriach 21 that their range turns from 3-cask maturation to 4 casks for their older spirits. Crafted by Master Blender Rachel Barrie, this expression is a blend of peated and unpeated whisky that has spent at least 21 years in ex-bourbon, sherry, virgin oak, and Bordeaux wine casks. This mellows the gentle sweet smokiness, making it blend together with the fruity and oaky notes. The resulting profile with honeyed smoke is rich, complex, and deep, coming together beautifully balanced once the liquids are married together. "A beautiful reflection of the landscape around Benriach. A real sense of mountain oak spice, fruit, creamy malt and elegant layers of smoke," says Barrie of the single malt that is bottled at 92 proof.

The nose opens with berries, apple, honey, and oak spice. Candied grapes are on the palate that is rich with cocoa, pine nuts, and an elegant touch of smoke. Finishes with caramelized fruit and honey smoke.