Size750mL Proof80 (40% ABV)
This artful blend of whiskies, each aged 21 years or more, pays homage to Queen Elizabeth and the 21-Gun Royal Salute. 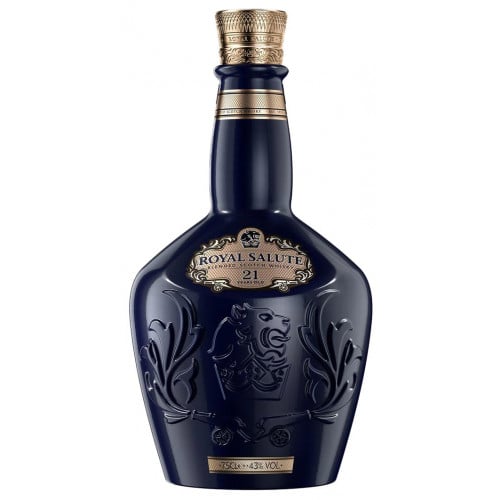 Named for the 21-Gun Royal Salute in which cannons are fired to honor and/or welcome sovereigns and dignitaries, Royal Salute 21 Year Old Blended Scotch Whisky is an artful blend of whiskies each aged no less than 21 years (the blend was selected by Royal Salute Master Blender Charles Julian himself). The whisky’s deep amber color is complemented by a nose of vanilla, toffee, fudge, old oak and moss. The sweeter palate is enhanced by notes of hazelnut and ginger, and leads to a remarkable finish accented by cereal, red berries and cream.

The porcelain flagon which holds the whisky is crafted by the world-famous artisans at Wade, and is sculpted in Cornish clay from the Jurassic-era before being naturally air-dried and finished by hand with a double layer of glazing to protect its precious contents. The three different colors of glaze used to dress the flagon – Ruby, Sapphire and Emerald – symbolize the precious gems on the Imperial State Crown.

Pick up a bottle of this spectacular whisky today, before it’s all gone!

Royal Salute traces its roots back to 1801 when Chivas Brothers was established as an upscale grocery store in the Scottish town of Aberdeen. In addition to selling high-end food, coffee and spices, the store offered French brandies and Caribbean rums to its wealthy clientele. Widely considered the finest purveyors in all of Scotland, in 1843 Chivas Brothers was granted a royal warrant to provide goods to Queen Victoria.

James and John Chivas, who joined the family business in the mid-19th century, noticed a growing demand among their affluent customers for a smoother whisky. Unsatisfied with the products currently available on the market, James and John began experimenting with their own proprietary blends, quickly building a reputation as pioneers in the art of whisky blending. The duo released their first blend, Royal Glen Dee, in the 1850s, followed shortly thereafter by Royal Strathythan, each providing a springboard for future Chivas Brothers creations.

Today, along with the Royal Salute brand, Royal Salute calls Strathisla Distillery in Speyside, Scotland its home. There, Master Distiller Colin Scott, who has over 40 years of experience in the industry, continues the Chivas Brothers tradition which began nearly two centuries ago. Launched in 1953 to commemorate Queen Elizabeth II’s coronation, Royal Salute has since become an international symbol for luxury whisky.
Explore all Royal Salute bottles >>

Deep amber color is complemented by a nose of vanilla, toffee, fudge, old oak and moss. The sweeter palate is enhanced by notes of hazelnut and ginger, and leads to a remarkable finish accented by cereal, red berries and cream.