Learn more
Size750mL Proof91.6 (45.8% ABV) *Please note that the ABV of this bottle may vary
Aged for a minimum of ten years, this whisky was rated a "Best Buy"by Wine Enthusiast.

Talisker has recently changed its designs, and as the original labels are being phased out, there is still a chance that you might receive a bottle different than what is in the picture. Rest assured, the liquid remains the same, regardless of the design. 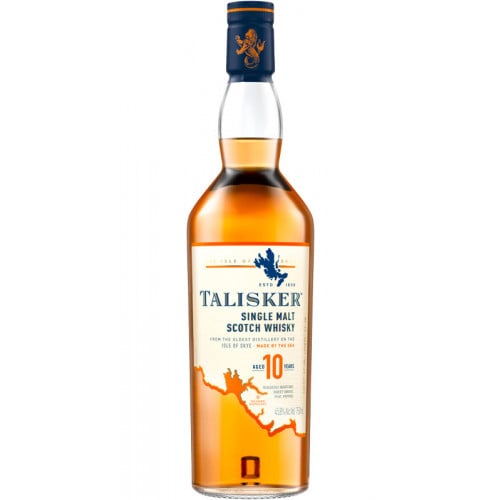 Following distillation, Talisker 10 Year Old Single Malt Whisky is matured in traditional oak casks for a minimum of ten years. The whisky has a slightly smoky aroma, with hints of spice and salt. The aroma gives way to notes of smoked meat, black pepper, cloves, honeyed oak and masa on the palate, and ultimately leads to a slightly sweet and long finish.

Talisker 10 Year Old Single Malt Scotch Whisky earned the Double Gold Medal at the San Francisco World Spirits Competition in 2013 and was rated the "Editor's Choice"by Whisky Magazine. In addition, it earned a rating of 9.5 out of 10 by Jim Murray's Whisky Bible and was rated a "Best Buy"by Wine Enthusiast. Finally, it earned a score of 94 points at the Ultimate Spirits Challenge in 2013.

"Making Talisker demands long hours and no compromises, so I tour the distillery several times a day making sure no part of the process betrays the rest," says Lochhead. Try an uncompromising whisky today!