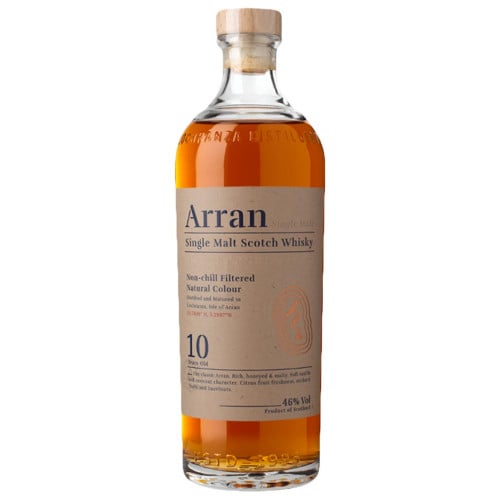 Arran 10 year is crafted from unpeated Scottish barley, which is malted and then fermented using a proprietary strain of yeast. Once the barley has been fermented, the wash is distilled twice — first through Arran’s copper-pot wash still and then again through Arran’s copper-pot spirit still. The stills were custom designed, says MacTaggart, and “shaped to allow the lighter vapors to come up through the stills.” As a result, Arran Single Malt Scotch Whisky has an appreciably softer and more delicate flavor profile.

An initial rush of rich vanilla sweet notes gives way to a touch of cinnamon. Classic Arran citrus notes on the fore round with age, revealing new depths of character against a backdrop of sweet oak. The palate delivers sweet notes, apple, and citrus.

3.5 out of 5
(3 reviews)
Write a review
Real email address is required to social networks
Sign in
Login with Google
Login with Facebook
Or
We also recommend