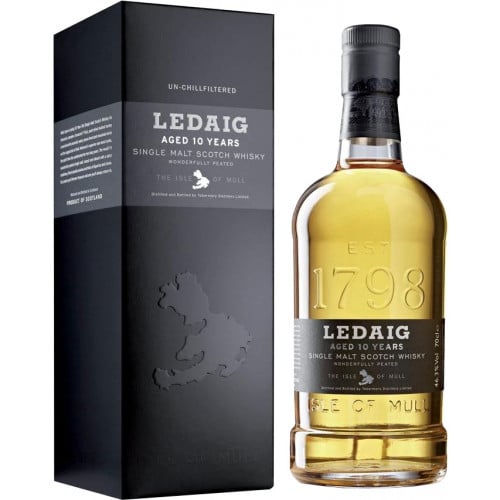 Ledaig 10 Year Old Single Malt Scotch Whisky is made exclusively from Scottish barley that is dried directly over a peat flame. In addition, the grains used to make Ledaig are malted and mashed with water sourced from Mary's Well, which contributes even stronger notes of smoke and sweet brine to the whisky's flavor profile.

Following distillation, Ledaig 10 Year Old Single Malt Scotch Whisky is matured for a decade in used bourbon casks that are laid to rest in ancient vaults on the Isle of Mull. It has a bright, golden color with an aroma of sweet smoke, mint chocolate and seaweed. The notes of spicy smoke, vanilla, and malt are robust and complex, and lead to a spicy and vibrant finish. Ledaig 10 Year Old Single Malt Scotch Whisky also earned a score of 90-95 points from Wine Enthusiast, which rated it a "Best Buy."

Ledaig 10 Year Old Single Malt Scotch Whisky represents a unique expression, not only of Scotland's terroir, but also of one of the oldest commercial distilleries still in existence.

Bright, golden color with an aroma of sweet smoke, mint chocolate and seaweed. The notes of spicy smoke, vanilla, and malt are robust and complex, and lead to a spicy and vibrant finish.