Size750mL Proof93.4 (46.7% ABV)
Samsara ('rebirth') is one of 3 expressions that were released in celebration of the reopening of the historic Bladnoch distillery. The blend of malts was matured in a combination of ex-bourbon and Californian red wine casks, making for a full-bodied and fragrant Lowland Scotch.
Notify me when this product is back in stock. 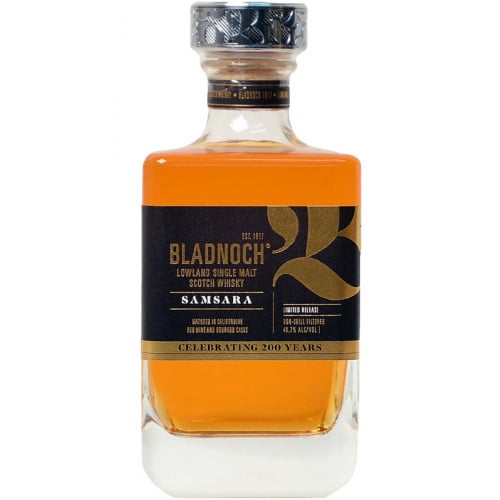 Bladnoch is a historic Lowlands distillery with a rocky history. In 2015, it was purchased by Australian entrepreneur David Prior with whisky production resuming soon after. 3 new expressions were released to celebrate the occasion: the Samsara, Talia, and Adela. Samsara, which stands for 'rebirth' is a blend of malts that were matured in a combination of ex-bourbon and Californian red wine casks. Bottled at 93.4 proof, it's a full-bodied and fragrant expression that has no added color and was non-chill filtered. It has won a Gold Medal at the San Francisco World Spirits Competition, among several other awards.

Grab your bottle of this Lowland single malt today!

Situated on the banks of the River Bladnoch, in Scotland's Lowlands, Bladnoch stands out as Scotland's southernmost distillery. A quaint distillery, Bladnoch uses just one pair of stills, creating whiskies known for their signature light/delicate character, highly sought after by connoisseurs. They source the water from the Bladnoch River. The whiskey production is overseen by Master Distiller Dr. Nick Savage, formerly of The Macallan.
Explore all Bladnoch bottles >>

The nose is creamy with vanilla, floral, orange zest, and apple aromas. The aromas are mirrored on the pleasantly sweet palate with additional grassy and nutty notes, culminating in a rich and fresh finish with hints of citrus, spice, and fruit.