Size750mL Proof96 Proof (48% ABV)
Matured in quarter casks, this whisky earned a score of 93 points from the Beverage Testing Institute in 2013. 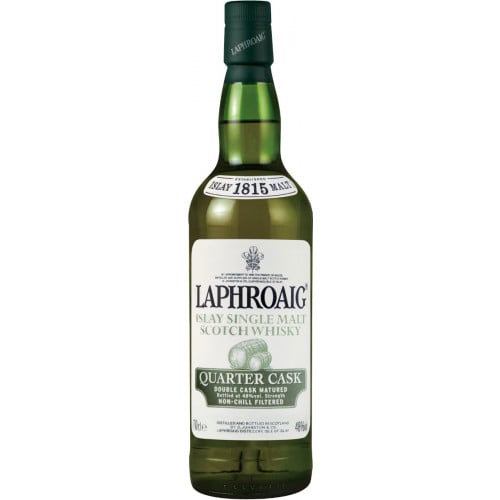 Laphroaig Quarter Cask Single Malt Whisky is one of the most flavorful and intense whiskies made anywhere in the world. During Prohibition, it was one of the few whiskies still legally imported into the United States, as it was considered a medicinal spirit. Laphroaig Single Malt is made from the finest Scottish barley, which is then malted at the distillery and smoked over a peat flame. Unlike other distilleries which source peat from the Scottish mainland, the peat used to smoke Laphroaig barley is made from the heather, mosses and lichens of Islay and adds a distinct iodine-like flavor to the whisky. After the barley has been malted and peated, it is fermented before being twice-distilled through Laphroaig's copper-pot stills. The unique stills have an usually flat base and flat surfaces, which contributes to the overall intensity of the whisky.

Following distillation, Laphroaig Quarter Cask Single Malt Scotch Whisky is matured in quarter casks. Quarter casks were used in the 19th century to transport whisky via horse or mule, as the animals could not carry the weight of traditional casks. As a result of their small size, the casks have a greater proportion of surface area to volume and thus, contribute stronger notes of oak and wood tannins to the whisky maturing inside. In addition, the casks "breathe" more deeply and as a result, provide a touch of salty tang to the whisky as well.

Laphroaig Quarter Cask Single Malt Scotch Whisky has an autumn gold color, along with an aroma of tropical fruits and smoke. The aroma gives way to notes of citrus, malt, cinnamon and oak on the palate, which are complemented by a subtle smoky undertone. The finish is refreshing and peaty, with touches of caramel and vanilla throughout.

Aroma of tropical fruits and smoke. Notes of citrus, malt, cinnamon and oak on the palate, which are complemented by a subtle smoky undertone. Finish is refreshing and peaty, with touches of caramel and vanilla throughout.