Size750mL Proof80 (40% ABV)
Aged for five years in the Caribbean, the rum is double-barreled for an additional three years and rested in Spain. 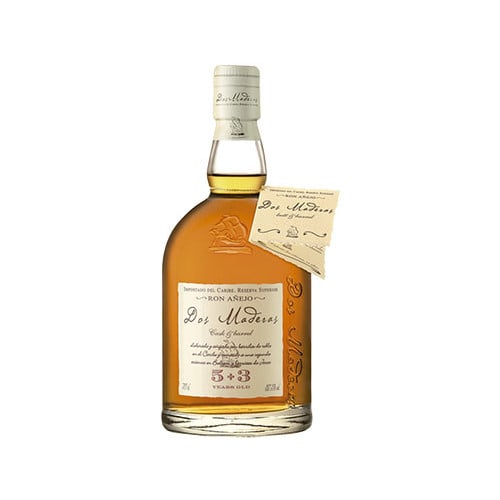 Founded in 1877 by two British brothers-in-law, Williams & Humbert is a winery situated in Spain that is dedicated to the production of wines, brandies, and surprisingly, rums. During the past 150 years, the company has grown to encompass 1,200 acres of vineyards in Jerez and to include the largest bodega in Europe, with capacity for 60,000 casks of sherry and brandy.

Ron Dos Maderas 5+3 Rum is produced by Williams & Humbert in traditional fashion. Centuries ago, Caribbean rum producers would mature and ship casks of rum to Europe and the United States, where the rum would spend additional time maturing before it was bottled and sold to the public. Ron Dos Maderas is matured in American oak casks for five years in its place of origin (Guyana and Barbados). Then the rum is shipped to Williams & Humbert's installations in Spain, where the rum is aged for another 3 years in casks that previously contained the internationally-renowned Dos Cortados Palo Cortado Sherry, which was aged for 20 years.

As a result of this dual maturation process, Ron Dos Maderas 5+3 Rum has an aroma of dark bing cherries, brandy and brown sugar. Notes of caramel, butterscotch, brown sugar and oak are apparent on the palate, and are complemented by a light, sweet undertone. The finish is slightly nutty and oaky, with a hint of vanilla.

The rum earned the Silver Medal at the San Francisco World Spirits Competition in 2013.

Aroma of dark bing cherries, brandy and brown sugar. Notes of caramel, butterscotch, brown sugar and oak are apparent on the palate, and are complemented by a light, sweet undertone. Finish is slightly nutty and oaky, with a hint of vanilla.