Size750mL Proof70 (35% ABV)
This rum is distilled in small batches in Alberta, Canada, from sugar cane. After spending at least one year in ex-bourbon casks, it is blended with Canadian maple syrup and spices.
Notify me when this product is back in stock. 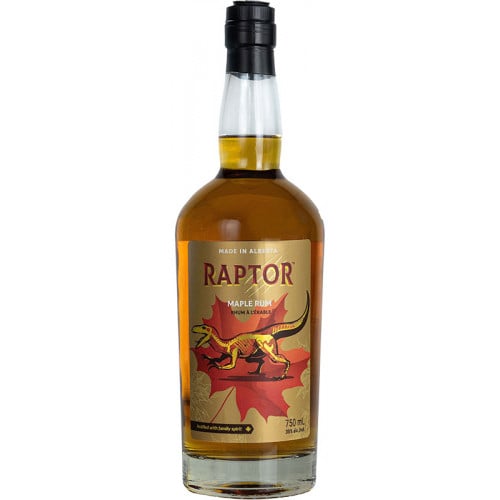 The Irnich family emigrated from Germany in 2007. Their home building company ran into trouble in 2015 after a devastating fire, prompting the family to rethink their future. The family's German roots had ties to both distilling and ice cream making, so they decided to join the two. As their boozy gelato business thrived, they decided to branch out into spirits ― by the time, they already had a distillery set up.

Based in St. Albert, Canada, they named their operation the T-Rex Distillery, after a visit to the Royal Tyrrell Museum in Alberta left them impressed by the Black Beauty T-Rex fossil ― one of the finest specimens in the world. The distillery is built on honesty and sustainability while "keeping it as local as possible." Sticking together as a family, they produce vodka, rum, gin, and whisky. T-Rex Canadian Vodka was the first spirit they produced, and it remains their flagship product to this day.

Their Raptor Canadian Rum is crafted in the style of European rhum. Distilled in small batches using a column still, Raptor Rum is crafted from sugar cane in Alberta, Canada. After spending at least one year in ex-bourbon casks, this expression is blended with Canadian maple syrup and spices. Finally, the rum is bottled at 70 proof.

Grab your bottle of this uniquely Canadian rum today!

The gold-colored rum opens with maple syrup aromas, spice, and gentle smoky aromas. The palate features a balance of sweet and spicy notes with maple syrup, dark sugar, vanilla, and baking spices. The finish is long and smooth.