Size750mL Proof80 (40% ABV)
Handcrafted by Habitation Clément's cellar master, this rhum earned a score of 94 points from the Beverage Testing Institute.
Notify me when this product is back in stock. 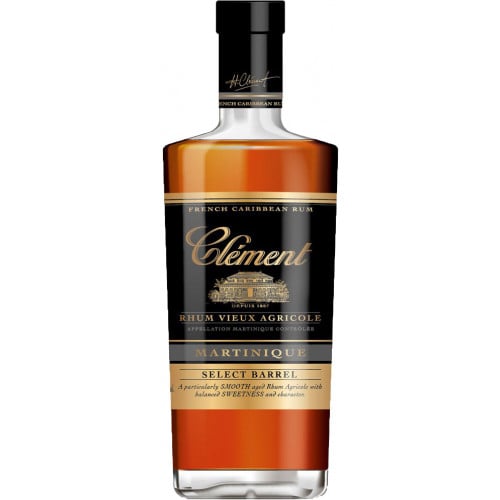 Rhum Clément is a rhum agricole crafted on the island nation of Martinque. The rhum is made exclusively from sugarcane harvested on the Domaine de l'Acajou Estate, which was purchased by Homère Clément in 1887. In order to harvest the sugarcane, expert farmers chop the stalks of the cane as low to the ground as possible in order to preserve the highest concentration of glucose (due to its weight, glucose is pulled to the bottom of the stalk by gravity). Then, within an hour of its harvest, the sugarcane is transported to the distillery and crushed in order to preserve the most fresh and raw flavor possible. Once the sugarcane juice has been extracted, it is fermented with an organic, proprietary strain of yeast before being distilled through Clément's single-column copper still (the still is modeled after the classic Armagnac stills of France).

Rhum Clément Select Barrel is crafted by Habitation Clément's cellar master. The cellar master chooses select casks of rum that have matured for a minimum of three years in French oak casks, and blends them together in order to craft this extraordinary rum.

The rum is rich yet supple, with hints of toffee, tropical fruits and creamy vanilla. In addition, smooth touches of sugar cane, charred oak and caramel accent a lush and viscous finish.

Rhum Clément Select Barrel earned a score of 93 points from the Beverage Testing Institute in 2014.