Size750mL Proof80 (40% ABV)
This premium Guatemalan añejo rum blend is aged up to 12 years and cut with real coconut water to 80 proof. It has a rich and smooth profile with vanilla and coconut notes.
Notify me when this product is back in stock. 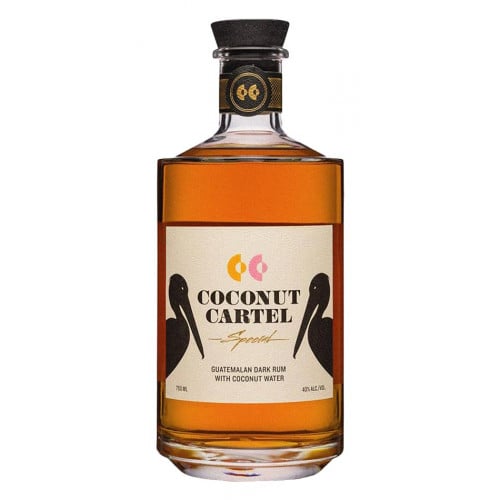 Mike and Dani Zig are Miami-born siblings who grew up torn between Miami, Guatemala, and El Salvador. By the time they had settled in Miami, they were "smuggling" coconuts from El Salvador in their luggage and selling them to Miami Beach hotels. The instagrammable drinks, packaged in their natural round shell, stamped with the Coconut Cartel logo, and served spiked with alcohol, became an instant hit and the talk of Miami.

This brought with it a slew of collaborations with the likes of Soho House, Standard Hotels, and The Surf Lodge, coming into the hands of celebrities like Drake, Martha Stewart, Prince Harry Sussex, Salma Hayek, and Cristiano Ronaldo. It was in 2018 that they graduated from branded coconuts to premium Guatemalan dark rum. "Premium Rum is finally having its moment in the sun, and the timing couldn’t be better to launch a fresh new face in somewhat a dull space. We are excited to change people’s perception of what they think rum is (hint: it’s not just what you chugged in college)," says founder Mike Zig.

Coconut Cartel Special is a premium Guatemalan añejo rum that is infused with real coconut water. Distilled in copper column stills, aged in new charred American oak barrels, it's a blend of rums up to 12 years of age. It was developed in partnership with some of the best coconut, coffee, and rum from Central America. The rum blend is cut with the coconut water to 80 proof, creating a rich and smooth profile with vanilla and coconut notes.

The nose opens with prominent vanilla, caramel, as well as coconut and orange zest. It's smooth on the palate with tropical coconut notes, oak, caramel, and dark chocolate. Finishes medium long with lingering oak, caramel, vanilla, coconut water, and a pleasant sweetness.