Size750mL Proof80 (40% ABV)
Don Papa is changing the industry with the first sipping rum from the Philippines. Distilled in the fertile foothills of Mt. Kanlaon, this premium release is aged for 7 years in American oak. 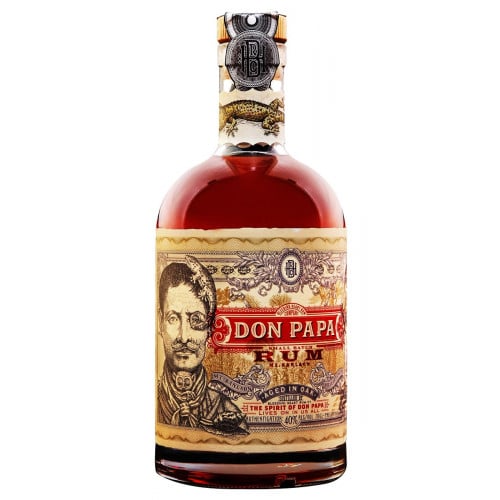 Don Papa Rum was founded in 2011 by Stephen Carroll, a former Remy Cointreau executive. After visiting the sugar capital of Negros, while visiting the Philippines, Carroll became enchanted by the island and its "stories of an island that had everything; from the world’s finest sugarcane, beautiful beaches, mountains, and volcanoes… even guerillas in the hills!" He became determined to switch up the Philippines’ less than stellar rum reputation, with a new imaginative, premium offering. The Philippines is ranked number three on the list of largest rum markets in the world, making it even more of a prime fit for former Remy exec.

The brand is indubitably inspired by the Philippines. The name Don Papa is a nod to Dionisio Magbuelas, more popularly known has Papa Isio, a healer, shaman, seer, rebel, and leader of the babaylanes or shamans, who played a key part during the years prior to the onset of the Philippine Revolution in the 19th century. Don Papa is inspired by the essence of the leader that Magbuelas was; "A real and charismatic leader from the island of Negros, Philippines, whose legend was instrumental to the independence of the island during the Revolution of the 1890s" (Don Papa).

Don Papa Rum is distilled in the fertile foothills of Mt. Kanlaon, an area where some of the finest sugarcane is milled producing rich, sweet molasses. The blending of Don Papa is sheer alchemy, done in collaboration with a master blender from Ginebra San Miguel. It is then aged for 7 years in American oak barrels yielding a pristine, small batch product. Heavy with notes of caramel and vanilla, this rum lends itself to the sweeter side, but nothing less should be expected from the Philippines first real sipping rum. Bottled with an eye-catching packaging featuring a trippy Alice in Wonderland meets island adventurer motif, this Don Papa rum is a truly intriguing release. Not to mention the creative genius that is the bottle itself.

The bespoke, imaginative vial symbolizes the history of the Philippines, as a creative representation of the influences of colonialism. The bottle is from France, the cork from Portugal, the label from Italy, and the brand image was designed in New York by Stranger & Stranger. The label features Don Papa, adorned with a gecko. There are 49 other animals hidden in the label including the native tarsier, endemic to the southern Philippine islands of Bohol, Samar, and Leyte. This award winning design won a Gold medal for packaging at the 2013 San Francisco World Spirits Competition, and product innovation of the year at the 2013 Paris Cocktail Spirits Show.

Get your bottle of this inspiring rum today!

The nose is light, with lots of fruit. The palate is smooth and delicate with flavors of vanilla, oak, honey, and candied fruits. The finish is rich and decadent.

3.9 out of 5
(7 reviews)
Write a review
Real email address is required to social networks
Sign in
Login with Google
Login with Facebook
Or
We also recommend