Size750mL Proof80 (40% ABV)
This rum is distilled in Japan from local sugarcane molasses. The pot-still agricultural rum has no added sugar or sweeteners and is bottled unaged at 80 proof. 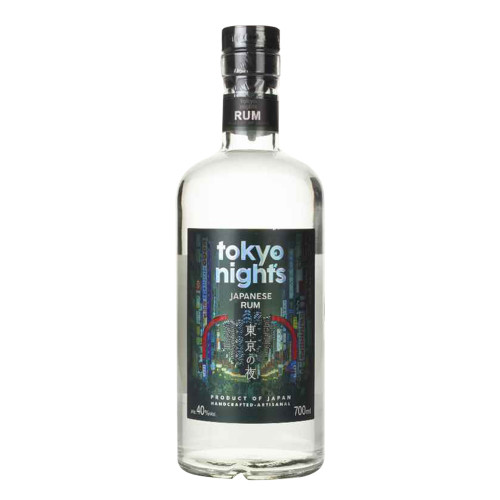 BBC Spirits stands for Bogdan & Bertrand Company. It was founded in 2010 in Bordeaux by Bertrand Fradin and Bogdan Tanasoiu, after the latter had spent 2 decades working in the hospitality, wine, and spirits industry. In the beginning, the focus was on exporting wine, but the company specialized in importing and distributing spirits in the following years. They support several new brands and develop their own, partnering with 15 distilleries around the world that range from whisk(e)y, rum, gin, vodka, and tequila, to shochu, sake, brandy, and absinthe distilleries.

Since the inception of BBC Spirits, the company has created several award-winning brands of innovative, luxury, and premium spirits. Tokyo Nights is one such endeavor. The Japanese range consists of 3 spirits that embody the originality of Japan: the Japanese Gin, Japanese Rum, and Japanese Vodka expressions. They all come from independent distilleries and each spirit is selected based on the quality of the ingredients used and each of them reflects the Japanese know-how that has made Tokyo the vibrant metropolis that it is. On the label, you'll find an image of Shibuya, Tokyo's busiest district.

Tokyo Nights Japanese Rum is distilled from local sugarcane molasses from Okinawa, Japan using a copper pot still. The agricultural rum contains no added sugar or sweeteners, making for a unique unaged terroir spirit with tropical and maritime notes. The Japanese Rum is bottled at 80 proof.

Grab a bottle of this unique Japanese rum today!

The rum is brimming with tropical notes of cooked mango, banana, pineapple, and stone fruit. The backbone has a grassy and earthy minerality to it with sugarcane and a touch of brine. Finishes long with hints of smoke and pepper.