Learn more
Size750mL Proof109.9 (54.95% ABV) *Please note that the ABV of this bottle may vary
This incredible spirit is aged 18 years, a rarity among rye whiskeys. The whiskey features a limited supply of spirit barreled in 1998 at the old Seagram’s distillery.
Notify me when this product is back in stock. 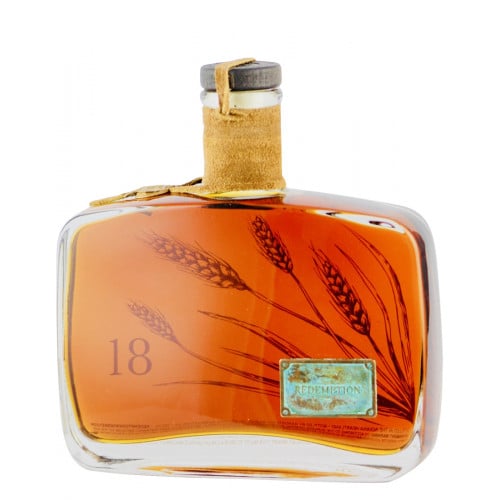 Founded in 2010 by Dave Schmier and Michael Kanbar. Redemption Rye is inspired by the idea of Rye re-claiming its pre-Prohibition dominance, harkening back to its days when the distinctive spirit was the most prominent in the industry. The Redemption portfolio is a line of high rye expressions, with a signature spicy character.

Redemption whiskeys are sourced from Lawrenceburg Indiana, produced at the old Seagram’s distillery, founded in 1847. After being distilled the whiskeys are barreled in Bardstown Kentucky. The impeccable nature of Redemption whiskeys comes from the meticulous attention to detail. During production, the spirit is handcrafted to taste, guaranteeing consistency in every drop. Each bottle of Redemption Rye is hand numbered to reflect the batch and bottle.

From Redemption's The Ancients collection comes a piece of American distilling history. The brand has expanded its portfolio to include this beautifully aged 18-Year-Old Rye as well as a 36-Year-Old Bourbon. This limited supply of whiskeys features spirit that was barreled in 1978 and 1998 at the old Seagram’s distillery. This beautiful rye captures the essence of ryes unique “ageability.” Expect ample notes of charred oak, bold rye spice, and sweet toffee.

Bursting with ample wood notes on the nose, with subtle baking spice. The palate has notes of charred oak, warming baking spice, almonds, red wine, minty notes and brown butter. This finish has a smoky character with sweet notes of toffee.