Size750mL Proof80 (40% ABV)
Iron Smoke Straight Bourbon Whiskey won Double Gold at 2017 North American Bourbon & Whiskey Competition in Louisiana, received a score of 95.5 Points from Jim Murray's 2018 Whiskey Bible and was named one of "10 Best Bourbons Beyond Kentucky" by Forbes in 2019.
Notify me when this product is back in stock. 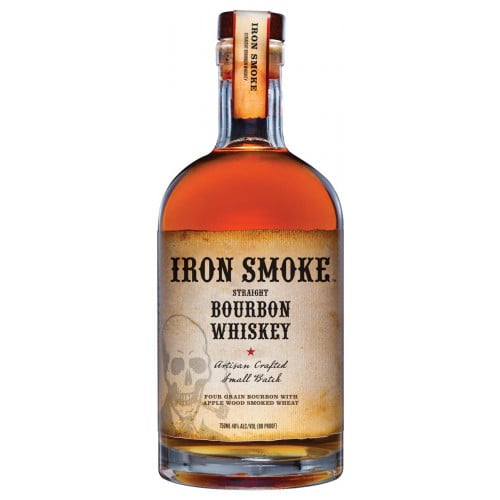 Tommy Brunett is a man of many talents — his band, The Tommy Brunett Band, tours frequently in the Upstate New York area and has gained national recognition for both original songs as well as classic covers of Johnny Cash and Billy Joe Shaver. A few years ago, while on tour, Brunett had an epiphany: “What goes together better than whisky and rock?” Being the consummate marketer that he is, Brunett teamed up with Master Distiller Drew Wescott to form Iron Smoke Distillery, which distills whiskey from fresh, local ingredients sourced directly from farms in the Finger Lakes region.

As a result, Iron Smoke Whiskey has a bright amber color, along with an aroma of stewed apples, cinnamon and oak. The palate is smoky, with charcoal notes melding nicely with clove spices and butterscotch, and leads to a dry, complex finish with notes of red fruits and pie crust.

Previously available only in small quantities, we’re now able to offer Iron Smoke Straight Bourbon Whiskey to all of our Caskers members.

Deep amber color with an aroma of caramel and butterscotch. The palate is rich, with charcoal and oaky notes melding nicely with a hint of spice, vanilla and toasted marshmallow, and leads to a dry, complex finish with notes of red fruits with a hint of sweet applewood smoke.