Size750mL Proof80 (40% ABV)
An all-time Irish Whiskey classic! Aged for 12 years, this Irish whiskey earned a score of 96 points from Whisky Advocate and the Double Gold Medal at the SFWSC. In addition it was named the "Irish Whiskey of the Year" at the Irish Whiskey Awards in 2013. 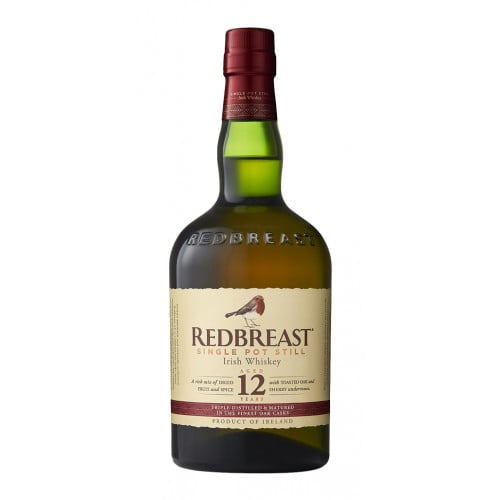 Today, Redbreast 12 Year Old Single Pot Still Irish Whiskey continues to pay homage to the legacy of Gilbey and its European origins. The whiskey is crafted from a marriage of malted and unmalted barley, which are milled and mashed before being triple-distilled through traditional copper-pot stills. The inclusions of unmalted barley in the whiskey's mashbill, along with the tradition of triple distillation, are uniquely Irish approaches to producing whiskey.

Following distillation, the whiskey is matured in a combination of casks that were previously used to mature Spanish Oloroso sherry and bourbon. After a 12-year slumber, the whiskey is bottled without the use of chill filtration.

Redbreast 12 Year Old Single Pot Still Irish Whiskey earned a score of 96 points from Whisky Advocate and the Double Gold Medal at the San Francisco World Spirits Competition on four separate occasions. In addition, it was named the "Irish Whiskey of the Year" at the Irish Whiskey Awards in 2013.

A complex spicy and fruity aroma with toasted wood notes evident. The palate is full flavored and complex; a harmonious balance of spicy, creamy, fruity, sherry and toasted notes. The finish is satisfyingly long, the complex flavors linger on the palate.