Size750mL Proof80 (40%ABV)
"I respect other Irish whiskeys, but I am coming in strong, with passion and with purpose." - Conor McGregor 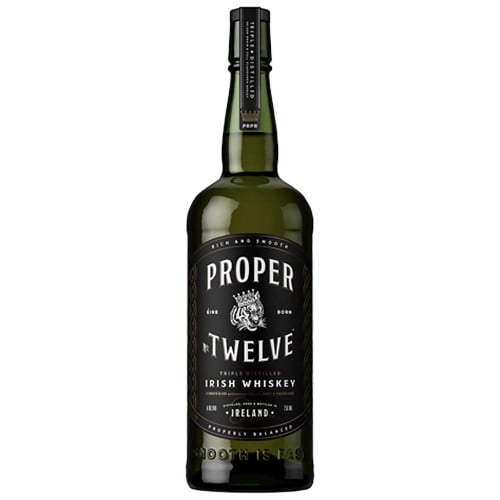 About Proper No. Twelve Irish Whiskey

Introducing Conor McGregor’s highly anticipated Irish Whiskey, Proper No. Twelve. The whiskey is produced by the mixed martial artist’s company Eire Born Spirits at the oldest whiskey distillery in Ireland. McGregor and his Master Distiller Elder, previously of Guinness, took painstaking measures to bring the whiskey to fruition. Proper No. Twelve is triple-distilled blend of fine golden grain and single malt. It is aged in ex-Bourbon casks and bottled at 40% ABV.

"I come from a place called Crumlin, in Dublin 12. It's a place dear to my heart. It's where I learned how to fight; it made me who I am today. It's a place I'm still very much a part of every single day of my life. So, that's where the name came from. It's proper Irish whiskey and twelve is my hometown," said McGregor.

Launched September of 2018, McGregor's dreams of having his own Irish whiskey have been brought to life. "Growing up on the streets of Dublin 12, I learned the values of loyalty and hard work. I respect other Irish whiskeys, but I am coming in strong, with passion and with purpose. I am the founder of this company and I am going to give it my all."

The brand will be donating $5 of every case sold to first responders around the world – up to $1million annually as part of their "One For All" initiative.

What can you expect from this profoundly anticipated whiskey? Hints of vanilla, honey, and toasted wood.

Proper No. Twelve is complex and sophisticated yet smooth and approachable with hints of vanilla, honey and toasted wood.

3.4 out of 5
(8 reviews)
Write a review
Real email address is required to social networks
Sign in
Login with Google
Login with Facebook
Or
We also recommend