This product is available in: CA, IL, NH, ND Unfortunately, we can't ship to PO Boxes and APO addresses.

Size750mL Proof80 (40% ABV)
This iconic Irish whiskey is triple distilled using techniques that date back to 1740, before being aged for a minimum of four years in a combination of ex-sherry and ex-bourbon casks.

This product is available in: CA, IL, NH, ND Unfortunately, we can't ship to PO Boxes and APO addresses. 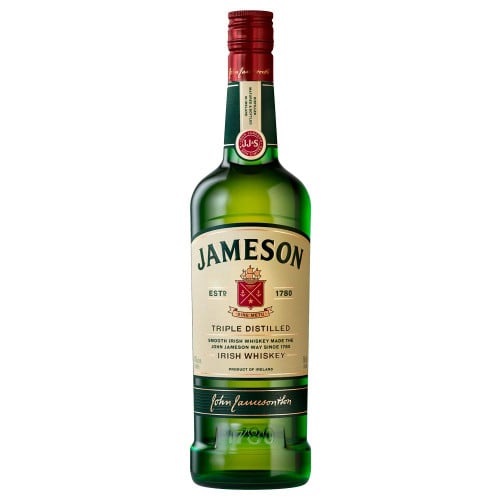 You'd be hard-pressed to find a more iconic name in the Irish whiskey world than "Jameson ." The Jameson tradition dates all the way back to 1740, when John Jameson was born into a family whose motto, "Sine Metu" ("Without Fear"), was earned through the family's courage in fighting pirates on the high seas during the 1500s.

Jameson Original Irish Whiskey is a blend of pot still and fine grain whiskeys that have been aged for a minimum of 4 years. The whiskey is aged in a combination of ex-sherry and ex-bourbon casks to add spicy and sweet notes.

Jameson Original Irish Whiskey is slightly floral on the nose with hints of spicy sweetness, which leads to a palate of spicy caramel notes combined with subtle notes of vanilla and almonds. The finish is smooth with notes of sherry and sweet fruit.

4.4 out of 5
(5 reviews)
Write a review
Real email address is required to social networks
Sign in
Login with Google
Login with Facebook
Or
We also recommend