Size750mL Proof80 (40% ABV)
This authentic, blended Irish whiskey is aged at least four years in ex-bourbon barrels.
Notify me when this product is back in stock. 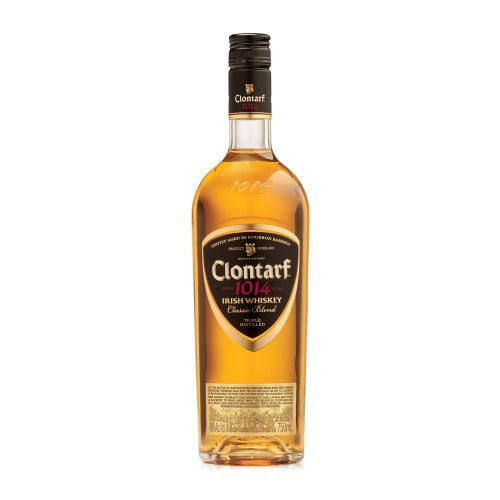 At the battle of Clontarf in 1014, Irish High King Brian Boru sent Viking invaders tumbling back into the sea and achieved a remarkable victory for the Irish over the fearsome Vikings.

The two armies met on the ﬁ elds of Clontarf near the city of Dublin on Good Friday in the spring of 1014. The battle lasted all day, raging across the ﬁelds and forests with no side gaining a clear advantage. Finally, with all of their leaders dead or dying, the Vikings broke ranks and returned to their ships.

Out of 8,000 men who fought that day, almost 6,000 were killed. The destruction of the Viking forces, including the deaths of virtually all of the Viking kings, permanently ended the invaders’ presence. Through this valiant and bloody victory at Clontarf, Brian Boru and his men made possible the Ireland that we know today. Clontarf Historic 1014 Victory Irish Whiskey is named after this famous battle.

Blended from a pot-stilled single malt whiskey and a column-stilled single grain whiskey, both of which are crafted with pure Irish spring water, Clontarf Historic 1014 Victory Irish Whiskey is aged gently for a minimum of four years in ex-bourbon barrels. As a result, the whiskey has a beautiful aroma of toasted oak, toffee and malt, which leads to a palate filled with mellow hints of vanilla and butterscotch. The finish lingers with hints of lush barley and honey.

According to Saveur, “This blended whiskey offers a gentle entry to the category at a more than gentle price... it contains enough musky, raw-barley pot-still spirit to give it ample body.”

Pick up a great whisky today!

Beautiful aroma of toasted oak, toffee and malt, which leads to a palate filled with mellow hints of vanilla and butterscotch. The finish lingers with hints of lush barley and honey.