Size750mL Proof86.4 (43.2% ABV)
This Single Pot Still is inspired by the "Three Swallow" tradition of coachmen bringing along small flasks of POWERS whiskey on long rides. Just enough to give each man a good swallow, but not enough to interfere with the job.

*Powers has recently changed their labels, and as the original labels are being phased out, there is still a chance that you might receive a bottle different than what is pictured. But rest assured, the liquid remains the same, regardless of the label. 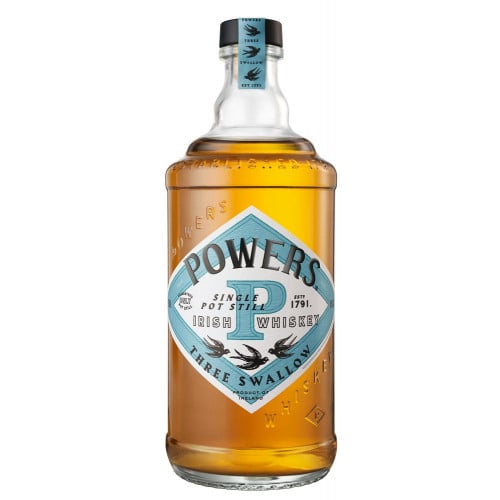 In 1791, John Powers founded the John’s Lane Distillery, which at the time was located on the outskirts of a growing Dublin City. The distillery used for its motive-power the first steam engine erected in Ireland — the engine was constructed for the sole purpose of producing pot still whiskey.

John Power & Son was the first Irish distiller to bottle its own whiskey, adopting a gold label exclusively for Powers bottled at John's Lane. The gold label guaranteed the higher quality and distinguished it from the white label Powers which was bottled by independent whiskey bonders. Hence it became customary when in a public house, to call for a "gold label."

Power's unique distillation process uses only the heart of the distillate, delivering a richly complex, and layered flavor profile that has been a standard of Irish Whiskey since 1791. This Three Swallow Release is a modern take on the original "Pure Pot Still Whiskey" style that made POWERS one of the best selling whiskeys in the world.

John's Lane was known for having incredibly high standards. Each of his coaches had three coachmen, a driver, and assistant up front, and another at the rear. This Three Swallow whiskey is inspired by the tradition of coachmen bringing along small flasks of POWERS whiskey on long rides. The amount of whiskey was just enough to give each man a good swallow, but not enough to interfere with his job. This tradition of "three swallows" was the original inspiration for the iconic POWERS symbol used to this day.

Three Swallow is a Single Pot Still made from a mash of malted and unmalted barley, triple-distilled in traditional copper pot stills before aging in 2nd and 3rd fill American oak casks. This method ensures the flavor of the distillate is at the fore and a small component (%3) of Sherry-aged whiskey adds harmony and finesse. The result is an incredible balance of sweetness, and spice, followed by a hint of citrus and fruit.

The Pot Still spice combines with a crisp barley character on the nose. Aromas of delicate herbs give way to grapefruit and green banana followed by nutty notes of marzipan imparted by the oak. The palate delivers initial flavors of smooth mouth-coating barley followed by an eruption of green apple and citrus. Herbs and spicy flavors are enhanced by a touch of cedarwood for extra complexity. The finish has a spicy sweetness that gives way to a signature Pot Still barley character balanced with a hint of sherry, leading to a crisp cereal finish with toasted oak notes.