Learn more
Size750mL Proof92 (46% ABV) *Please note that the ABV of this bottle may vary
This traditional Irish whiskey is aged in both American oak and Oloroso Sherry barrels, and won a Gold Medal at the 2015 San Francisco World Spirits Competition.
Notify me when this product is back in stock. 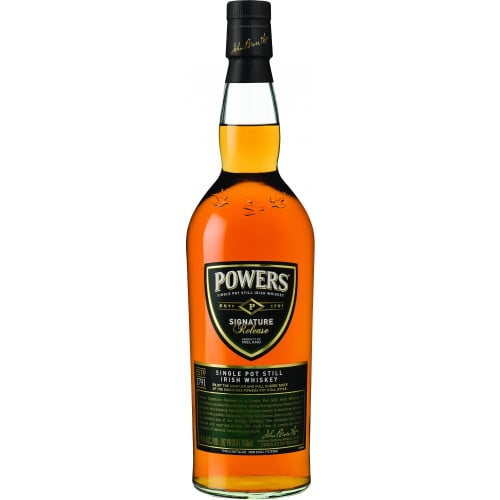 In 1791, John Powers founded the Powers Distillery on John’s Lane, which at the time was located on the outskirts of a growing Dublin City. The distillery used for its motive-power the first steam engine erected in Ireland — the engine was constructed for the sole purpose of producing pot still whiskey.

John Power & Son was the first Irish distiller to bottle its own whiskey, adopting a gold label exclusively for Powers bottled at John's Lane. The gold label guaranteed the higher quality and distinguished it from the white label Powers which was bottled by independent whiskey bonders. Hence it became customary, when in a public house, to call for a 'gold label'.

Following the formation of the Irish Distillers Group in 1966, which consisted of the distilling enterprises of Powers, Jameson and Cork Distilleries Company, a decision was made to move all distillation operations to one central site in the town of Midleton, Co. Cork. Thus, in 1976, the Powers' John's Lane Distillery was closed.

Crafted at the Midleton Distillery, Powers Single Pot Still Signature Release Irish Whiskey is named after the original Powers Distillery, which was situated on John's Lane in Dublin. The whiskey is made exclusively from malted and unmalted barley, which is triple-distilled through copper pot stills in traditional Irish fashion. Following distillation, the whiskey is aged in a combination of American oak and Oloroso Sherry barrels before being carefully blended together. After its beautyrest, the whiskey is bottled at 92 proof.

Powers Signature Release Irish Whiskey has a crisp herbal aroma of nutmeg, fig and black peppercorn. The palate reveals notes of vanilla, black licorice, cinnamon and melon, and leads to a long finish complete with honey and baking spices.

Crisp herbal aroma of nutmeg, fig and black peppercorn. The palate reveals notes of vanilla, black licorice, cinnamon and melon, and leads to a long finish complete with honey and baking spices.