Size750mL Proof80 (40% ABV)
Aged for nearly a decade, this whiskey is "unquestionably one of the world's greatest whiskies," according to the Whisky Bible.
Notify me when this product is back in stock. 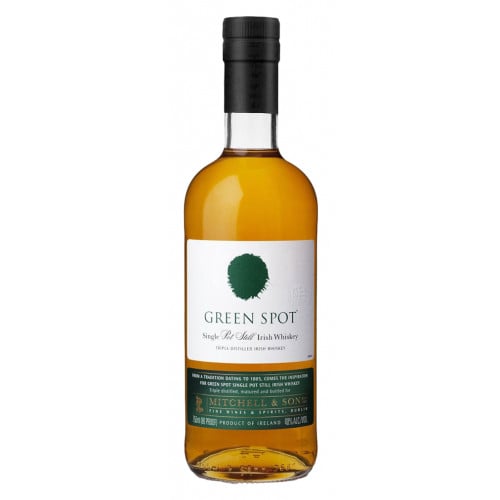 In 1805, the Mitchell & Sons Wine Merchants Company was established in the heart of Dublin, Ireland. By the turn of the 19th century, the Mitchells sold a range of Irish whiskeys under the name "Spot." This name originated from the company's practice of marking casks of different ages with a spot of colored paint. As a result, Mitchell & Sons sold whiskeys named Blue Spot, Yellow Spot and Red Spot, although Green Spot emerged as their most popular brand.

Today, Green Spot Single Pot Still Irish Whiskey continues to be crafted in the heart of Ireland. The whiskey is made from malted and unmalted barley, which are milled and mashed before being distilled through a traditional pot still. Following distillation, the whiskey is matured in a combination of American oak casks that were previously used to mature bourbon (75%) and European oak casks that were previously used to mature sherry (25%). Once the whiskey has matured for eight to nine years, the casks are blended together and brought to proof.

"Pot Still Whiskeys define the traditional flavor character of Irish whiskey and we have seen a renewed interest and growth in the category over the last few years," says Brian Nation, the master distiller at Midleton Distillery, which makes Green Spot Whiskey. Green Spot Single Pot Still Irish Whiskey has an aroma of butterscotch, caramel, honeyed oak, pine and orange that gives way to notes of citrus, tart apples, plums and apricots on the palate. The finish is smooth yet slightly spicy, with a touch of cinnamon and ginger.

Green Spot Single Pot Still Irish Whiskey was just released in the United States in 2014. It was named the top spirit of 2012 by "Serious Eats," and is "unquestionably one of the world's greatest whiskies" according to Jim Murray, author of the Whisky Bible.

Aroma of butterscotch, caramel, honeyed oak, pine and orange. Notes of citrus, tart apples, plums and apricots on the palate. Finish is smooth yet slightly spicy, with a touch of cinnamon and ginger.