The Whistler P.X. I Love You Single Malt Irish Whiskey

Learn more
Size750mL Proof92 (46% ABV) *Please note that the ABV of this bottle may vary
A decadent expression that boasts a masterful sherry influence. Finished for at least 9 months in Pedro Ximenez casks, it’s bottled at 92 proof and immediately greets with a delightful sherry nose.
Notify me when this product is back in stock. 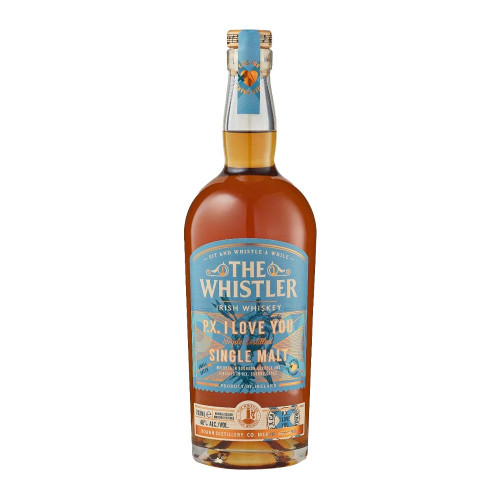 About The Whistler P.X. I Love You Single Malt Irish Whiskey

The Whistler P. X. I Love You Single Malt is one of those decadent expressions that boasts a masterful sherry influence. Finished for at least 9 months in Pedro Ximenez casks, it’s bottled at 92 proof and immediately greets with a delightful sherry nose while the palate opens with wood before developing flavors of dried fruits, brown sugar, walnut, zesty citrus and a hint of leather.


Toast to love with The Whistler P. X. I Love You Single Malt!

The nose immediately greets with a delightful sherry influence and dried berries, raisins, cherries, and sultanas. The palate opens up with wood notes before joined by flavors of dried fruits, brown sugar, walnut, zesty citrus and a hint of leather. The finish is smooth and subtle with walnuts and dried fruits.