*Powers has recently changed their labels, and as the original labels are being phased out, there is still a chance that you might receive a bottle different than what is pictured. But rest assured, the liquid remains the same, regardless of the label.
Notify me when this product is back in stock. 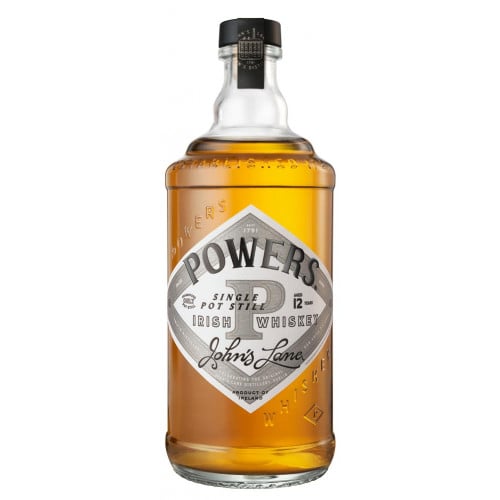 In 1791, John Powers founded the John’s Lane Distillery, which at the time was located on the outskirts of a growing Dublin City. The distillery used for its motive-power the first steam engine erected in Ireland — the engine was constructed for the sole purpose of producing pot still whiskey.

John Power & Son was the first Irish distiller to bottle its own whiskey, adopting a gold label exclusively for Powers bottled at John's Lane. The gold label guaranteed the higher quality and distinguished it from the white label Powers which was bottled by independent whiskey bonders. Hence it became customary when in a public house, to call for a "gold label."

Power's unique distillation process uses only the heart of the distillate, delivering a richly complex, and layered flavor profile that has been a standard of Irish Whiskey since 1791. Crafted at the Midleton Distillery, Powers Irish Whiskey 12 Year John's Lane Release is named after the original Powers Distillery, which was situated on John's Lane in Dublin. The whiskey is made exclusively from malted and unmalted barley, which is triple distilled through pot-stills in traditional Irish fashion. Following distillation, a portion of the whiskey is matured in 2nd and 3rd fill American oak casks, while the remainder is aged in casks that were previously used to mature Oloroso sherry. After a minimum of twelve-year beautyrest, the whiskey is bottled 92 proof.

Powers Irish Whiskey 12 Year John's Lane Release has an earthy aroma that gives way to notes of leather, charred wood, dark chocolate and dried apricots, vanilla and honey on the palate. The finish is sweet and bold, with touches of honey and toasted oak. The whiskey was named the Irish Whiskey of the Year in 2012 by Jim Murray's Whisky Bible.

An earthy aroma that gives way to notes of leather, charred wood, dark chocolate and dried apricots, vanilla and honey on the palate. The finish is sweet and bold, with touches of honey and toasted oak.