Learn more
Size750mL Proof92 (46% ABV) *Please note that the ABV of this bottle may vary
Peated to 40 phenol ppm, this whisky was crafted by a master distiller with over five decades of experience.
Notify me when this product is back in stock. 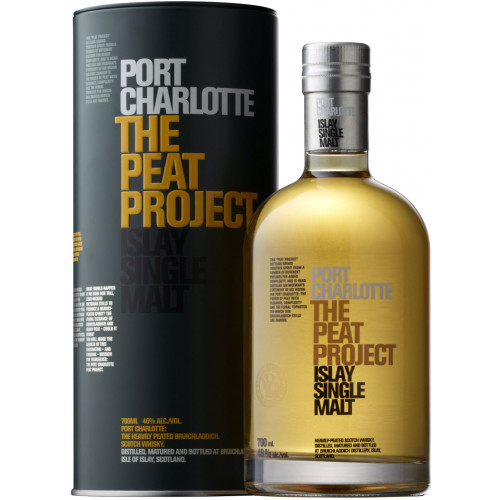 Situated along the shores of Loch Indaal, the Bruichladdich (pronounced brook-laddie) Distillery was founded in 1881 by the Harvey Brothers. The Harvey Brothers heralded from a dynastic whisky family — their ancestors had owned two distilleries in Glasgow for over a century — and together, they pooled their talents in order to build a third distillery that belonged to the family (the distillery was designed by John Harvey, engineered by Robert Harvey and financed by William Harvey). Today, the modern Bruichladdich Distillery is known as one of the most experimental and adventurous of the Scottish distilleries, and continues to use much of the same equipment installed by the Harvey Brothers in the 19th century.

Port Charlotte The Peat Project is an experiment by Bruichladdich Distillery that was masterminded by Master Distiller Jim McEwan. McEwan, who began working at Bowmore Distillery on August 1, 1963, has over five decades of experience in the Scotch whisky industry. "I started work for Bowmore Distillery on 1st August 1963 as an apprentice cooper,"he says. "During that period I gained experience in virtually every aspect of distillation from warehousing, mashing and malting."

The Peat Project is crafted exclusively from Scottish barley, which is peated to 40 phenol parts per million. Once the whisky has been peated, the grains are milled and mashed before being fermented in the distillery's original washbacks, which are made of Douglas Fir. Following fermentation, the whisky is distilled through Bruichladdich's 130 year-old, 20-foot tall, diamond-shaped stills. The Victorian-era stills produce whisky that is notably floral and elegant. During production of the whisky, no computers or automated components are used — the stills are heated by steam and monitored by McEwan in order to ensure that the whisky has complex and layered flavors.

Following distillation, the Peat Project Single Malt Scotch Whisky is matured in American oak casks that were previously used to mature bourbon. The casks are stored in the nearby village of Port Charlotte where they are allowed to mature for a number of years. The Peat Project is "assembled from several different vintages and harvest characteristics, for intriguing complexity," says McEwan. Port Charlotte The Peat Project has an aroma of black pepper, vanilla, smoke and lemon zest. The aroma gives way to a brilliant creaminess on the palate, with touches of oak, dried fruits, peat and salty tang. The finish is layered, with notes of green fruit, vanilla and smoke that linger.

"It has been a journey of 50 years for me," says McEwan, "and like all journeys it has had its ups and downs but you learn from the experiences and become a better man for them." Try a better whisky today!

Aroma of black pepper, vanilla, smoke and lemon zest. Brilliant creaminess on the palate, with touches of oak, dried fruits, peat and salty tang. Finish is layered, with notes of green fruit, vanilla and smoke that linger.