Size750mL Proof86 (43% ABV)
This scotch whisky, which has been aged for 14 years, is the core expression of Oban Distillery, one of the oldest and most storied distilleries in Scotland.
Notify me when this product is back in stock. 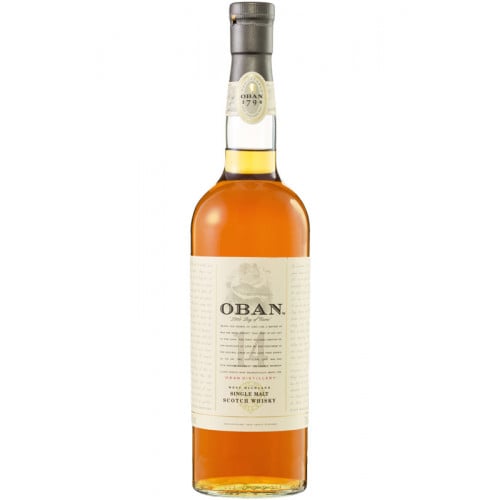 Oban Single Malt Whisky is made using 100% barley, which is malted to the distillery's exact specifications. After the barley is malted, it is partially germinated and gently dried over a peat kiln, giving it a slightly smoky, malty flavor profile. Then, the malted barley is mashed and fermented before being twice-distilled through Oban's lantern-shaped copper-pot stills. The stills are among the smallest in Scotland, and limit Oban's production to just 650,000 liters of whisky annually.

Following distillation, Oban 14 Year Old Single Malt Scotch Whisky is aged for 14 years in oak casks. During this beautyrest, the whisky is touched by its unique environment and geography — the warm, salty Gulf Stream and mild, temperate climate of Oban are reflected in the whisky. As a result of the distillery's unique stills and geography, the whisky has an olive gold color and a rich, sweet aroma filled with lemons, pears and oranges, as well as sea-salt and a light peatiness. The palate is full-bodied and extremely dry, with notes of dried figs and honey, and leads to a soft, oaky finish.

Oban 14 Year Old Single Malt Whisky earned a Gold Medal at the 2013 International Wine & Spirit Competition, is the core expression of this storied distillery which has been operating for over 200 years.

Olive gold color and a rich, sweet aroma filled with lemons, pears and oranges, as well as sea-salt and a light peatiness. Palate is full-bodied and extremely dry, with notes of dried figs and honey, and leads to a soft, oaky finish.