Learn more
Size750mL Proof80 (40% ABV) *Please note that the ABV of this bottle may vary
As the most mature expression in the Glendullan stable, this Singleton release is matured for 18 years in ex-bourbon barrels. 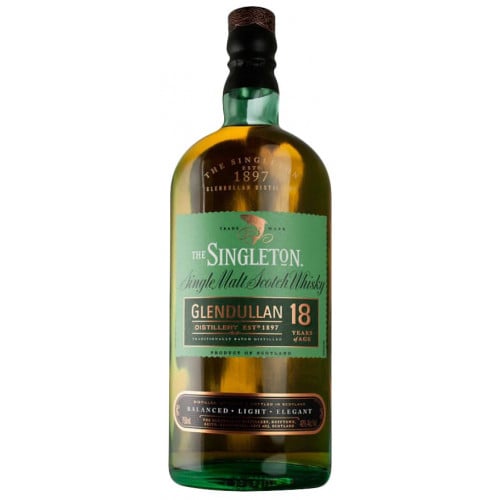 The Singleton brand is actually manufactured in three Scottish whisky distilleries; one of which is Glendullan. This 18 Year expression, along with the younger expressions from the singleton lineup (a 15 and a 12 year), was released in the US in 2016.

With its notes of chocolate, banana almond, and honey, this Speyside single malt is matured using mostly ex-bourbon American oak barrels, and bottled at 40% ABV. As the most mature expression in the Glendullan stable, its structure shines through and takes center stage, while sweet fruit complements the palate all throughout. This well-balanced character is rounded off by a smooth, dry finish.

Chocolate, banana and almond, toasted marshmallow and honeycomb, a subtle scorched wood on the nose. Sweet toffee on the palate, followed by toasted coconut, cocoa, and nutty flavors. The finish is long lasting.