NOTE:
Vintage may vary.
Aged for ten years, this limited edition single malt scotch whisky was finished in Amoroso sherry casks.
Notify me when this product is back in stock. 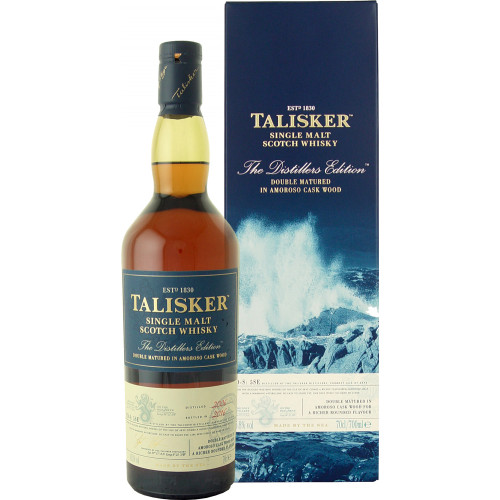 Talisker Single Malt Whisky is made from malted barley sourced from the Muir of Ord, a village in Highland, Scotland. The barley is lightly peated to approximately 18 phenol parts per million, which contributes a slightly smoky flavor profile to the whisky. Once the barley has been malted and peated, it is mashed using soft water drawn from one of the 14 underground springs that rise from Hawk Hill — Talisker has been using the same water source since it was founded nearly two centuries ago. “I'm restless at heart so you'll find me poking my nose into the mash tun at all hours,” says Mark Lochhead, the distillery’s manager. After the barley has been mashed, it is fermented in the distillery’s wooden washbacks before being twice distilled through Talisker’s copper-pot stills. The stills are equipped swan-shaped lye pipes and worm tubs, which gives Talisker whisky its signature, full-bodied flavor profile.

Talisker Distiller’s Edition 2014 Single Malt Scotch Whisky was distilled in 2003 and matured for ten years in used, American bourbon casks. After its initial beautyrest, the whisky was double-barreled, or finished, in casks that were previously used to mature Amoroso sherry. Amoroso sherry is a type of Oloroso sherry, but is generally sweetened with a blend of Pedro Ximénez grapes. As a result, Talisker Distiller’s Edition is imbued with an aroma of red fruits, berries and apricots, which lead to a crisp, full body. Initially, the whisky has sweet, fruity flavors, along with touches of sea salt, peat and vanilla that ultimately fade into a lingering, elegant finish.

Talisker Distiller’s Edition Single Malt Whisky earned a score of 96-100 points from Wine Enthusiast, which rated it a “Best Buy.”

“As Distillery Manager at Talisker, it's my task is to ensure that quality is king,” says Lochhead.

Aroma of red fruits, berries and apricots, which lead to a crisp, full body. Sweet, fruity flavors, along with touches of sea salt, peat and vanilla that ultimately fade into a lingering, elegant finish.