Learn more
Size750mL Proof86 (43% ABV) *Please note that the ABV of this bottle may vary
Aged for a minimum of 17 years, this whisky was named the World's Best Blended Malt at the World Whiskies Awards in 2014. 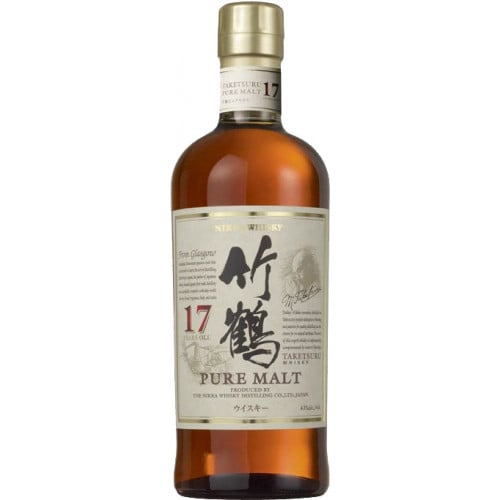 In 1895, Masataka Taketsuru — the father of Japanese Whisky — was born in the small town of Takehara, Japan. At the time, Masataka's family owned a sake brewery, and in preparing to carry on the family trade, Masataka studied chemistry and biology at Osaka Technical High School. After graduating high school, Masataka showed more interest in whisky than in sake and in 1918, he enrolled at the University of Glasgow in Scotland, becoming the first Japanese ever to study the art of whisky-making. While in Scotland, Masataka took chemistry courses during the day while apprenticing with distilleries at night, learning to distill and blend whisky first-hand at some of Scotland's most prestigious distilleries. In 1920, Masataka returned to Japan, and within the decade, had produced the country's first single malt whisky.

Nikka Taketsuru 17 Year Old Japanese Pure Malt Whisky is a marriage of single malt whiskies distilled at the Yoichi and Miyagikyo Distilleries. Once each of the whiskies has been distilled, they are aged for a minimum of 17 years before being vatted together in order to create Taketsuru Pure Malt Whisky. As a result of this vatting, Taketsuru 17 Year Old Pure Malt has a malty aroma, with hints of fruit salad, berries and plantains. The aroma gives way to notes of vanilla, blood oranges, whipped cream and milk chocolate on the palate, and leads to a finish with hints of bittersweet oak, cocoa and fruit.

Nikka Taketsuru 17 Year Old Japanese Pure Malt Whisky earned the Gold Medal at the World Whiskies Awards in 2014, where it was named the World's Best Blended Malt and the Best Japanese Blended Malt Whisky. Pick up a bottle today!

Malty aroma, with hints of fruit salad, berries and plantains. Notes of vanilla, blood oranges, whipped cream and milk chocolate on the palate. Finish with hints of bittersweet oak, cocoa and fruit.