This product is available in: CA, NH, NY, ND, WA Unfortunately, we can't ship to PO Boxes and APO addresses.

Size750mL Proof94 (47% ABV)
This limited-edition expression celebrates the 100th anniversary of Masataka's wedding. First aged in ex-sherry casks, it was finished in Nikka's apple brandy casks, before being bottled at 94 proof. A total of 6450 bottles were produced.

This product is available in: CA, NH, NY, ND, WA Unfortunately, we can't ship to PO Boxes and APO addresses. 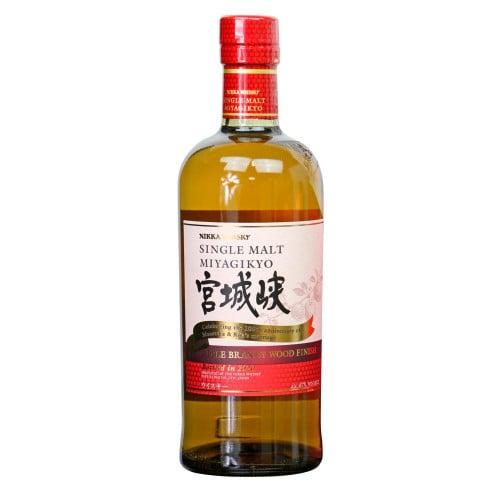 In 1895, Masataka Taketsuru — "the father of Japanese Whisky" — was born in the small town of Takehara, Japan. At the time, Masataka's family owned a sake brewery, and in preparing to carry on the family trade, Masataka studied chemistry and biology at Osaka Technical High School. After graduating high school, Masataka showed more interest in whisky than in sake and in 1918, he enrolled at the University of Glasgow in Scotland, becoming the first Japanese ever to study the art of whisky-making. While in Scotland, Masataka took chemistry courses during the day while apprenticing with distilleries at night, learning to distill and blend whisky first-hand at some of Scotland's most prestigious distilleries. In 1920, Masataka returned to Japan, and within the decade, had produced the country's first single malt whisky.

In 1934, Masataka moved to the town of Yoichi and opened the doors to Nikka Whisky Co. Situated approximately 35 miles west of Sapporo City, Nikka's Yoichi Distillery is encapsulated by mountains (to the east, south, and west) and by the Sea of Japan (to the north), creating a unique and isolated environment for the production and maturation of single malt whisky. The clean air, humidity, and access to underground water filtered through a layer of peat results in a rich and masculine malt.

Nikka Miyagikyo Japanese Single Malt Whisky is distilled and aged at the Miyagikyo Distillery, which is known for its lighter, more floral malts (as opposed to the heavier, more oily malts produced at Yoichi). Made from 100% malted barley and distilled in pot stills that are heated with steam as opposed to coal fire, Nikka Miyagikyo Japanese Single Malt Whisky is then aged in ex-sherry casks. The Single Malt Apple Brandy Wood Finish is a limited edition whisky that was bottled in 2020. It celebrates the 100th anniversary of Masataka's marriage. When Nikka began its operation, it was the apples that helped them keep the business operational, just like Masataka's Scottish wife Rita Cowan supported his dream. The expression is finished in Nikka's apple brandy casks, introducing gentle apple aromas to the delicate sherried profile. A total of 6450 bottles were produced.

The nose is floral with prominent apple aromas, as well as a touch of honey and pepper. The apple and honey translate onto the pleasantly sweet palate where a touch of peat becomes apparent along with hints of cinnamon.