$487.99
Caskers Rewards members earn up to 24 store points back when buying this bottle.

Size750mL Proof106.6 (53.3% ABV)
This annual expression is distilled and bottled by Ichiru Akuto and his small team. It was matured in a combination of new barrels, 1st-fill bourbon barrels, and new hogsheads, Chichibu's hot and humid summers and cold winter temperatures being perfect for whisky maturation.
Notify me when this product is back in stock.

Caskers Rewards Caskers Rewards members earn up to 24 store points back when buying this bottle. Learn more
Out of stock
Skip to the end of the images gallery 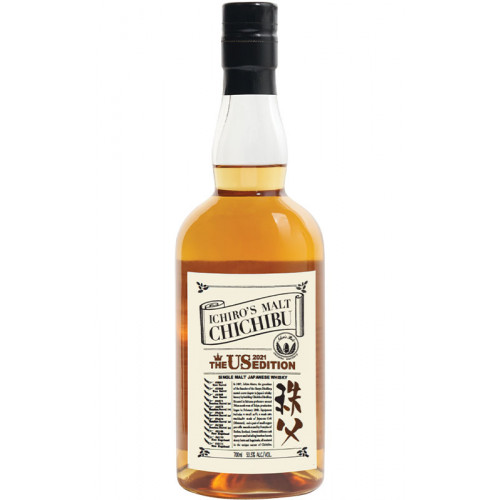 About Ichiro's Malt Chichibu The US 2021 Edition Japanese Whisky

Ichiro's Malt Chichibu The US 2021 Edition is a Japanese single malt whisky that is crafted at the Chichibu distillery. It was aged in a combination of new barrels, 1st-fill bourbon barrels, and new hogsheads. Bottled without chill filtration, a total of 2,150 bottles of this annual expression were produced. The whisky has notes of honey, tropical fruit, orchard fruit, spice, and a touch of peat.

Get one of only 2,150 bottles of this whisky today!

The nose of this Japanese whisky opens with aromas of honey, dark chocolate, and orchard fruit with pears in the forefront. The palate is fruity with pineapple, guava, black pepper, and ginger. The finish is pleasantly sweet with lingering honey and a touch of peat.