Be the first to review this product
Renowned Japanese Mars Shinshu and Chichibu distilleries started this collaboration in secret several years ago. They swapped casks of their whisky, blended it, each maturing the spirit at their distillery. This one comes from the Mars distillery and is bottled at 108 proof.
$579.99
Add to Wish List

Mars Shinshu is Japan's highest whisky distillery, at 798 meters ― just over 2,600 feet ― nestled between Japan’s Southern and Central Alps. Mars Shinshu is owned by the Hombo family, who have been in the business of distillation for over a century. Whisky became a part of the Mars Shinshu production lineup in 1949. In 1984, Shinshu decided to move their southernmost Kyushu distillery to the picturesque alpine Miyada village, where the high altitude and cool climate make for suitable conditions for whisky-making. The whisky is produced from mineral-rich waters that pass through granite rock.

For nearly three centuries, Ichiro Akuto's family brewed sake along the banks of the Tone River in Central Japan. Following the end of World War II, his family received a distiller's license and purchased two second-hand stills from a Scottish distillery. By the turn of the century, however, his father had made the difficult decision to dismantle the stills and sell the 400 casks of remaining whisky that were still maturing in the distillery's rickhouses. Fueled by a belief in the potential for Japanese single malts, Ichiro purchased the casks from his father. He went to study distillation techniques at Benriach and Springbank Distillery, before returning to Japan and constructing a state-of-the-art distillery in Chichibu, the Saitama prefecture. The small distillery opened its doors in 2008 and has only 9 full-time employees. The climate of Chichibu with its hot and humid summers and cold winter temperatures is perfect for distilling whisky, while the famous Arakawa River provides excellent water.

This expression had the 2 renowned Japanese distilleries collaborate, trading casks in the vein of their Scottish brethren. It's a blend of Mars Shinshu Komagatake and Ichiru's Malt Chichibu, with the blend patiently matured at Japan's highest whisky distillery. Bottled at 108 proof, the whisky is limited to 10,918 bottles.

Grab a bottle of this limited-edition Japanese whisky today!

The nose opens with creamy and sweet aromas of maple syrup, plum, pear, pine forest, and orange zest. The palate is equally sweet with apple, caramel, cake, dark chocolate, baking spice, and hints of smoke that linger through the gently tannic finish with a touch of black tea. 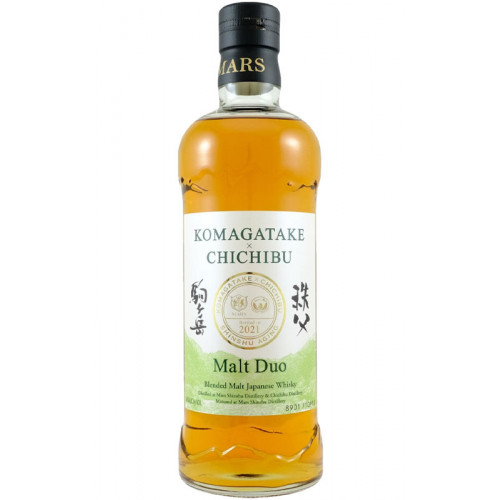