Learn more
Size750mL Proof106 (53% ABV)
This expression is a collaboration between the Chichibu and Mars Shinshu distilleries. The blend of both whiskies was matured at the Chichibu distillery in a combination of ex-bourbon, American oak, and sherry casks, and is limited to 10,200 bottles.
Notify me when this product is back in stock. 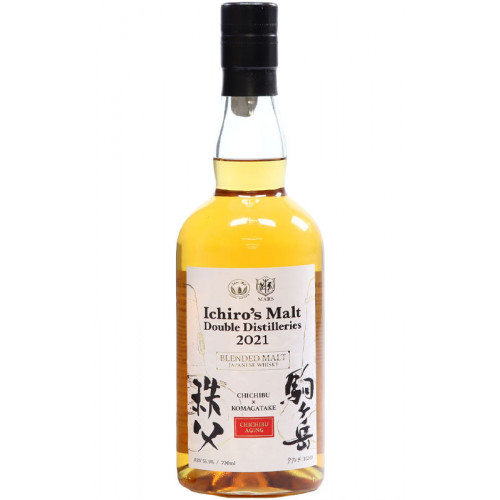 Ichiro's Malt Double Distilleries Chichibu X Komagatake sees the Chichibu Distillery collaborate with the Mars Shinshu distillery. Mars Shinshu is Japan's highest whisky distillery, at 798 meters ― just over 2,600 feet ― nestled between Japan’s Southern and Central Alps. Mars Shinshu is owned by the Hombo family, who have been in the business of distillation for over a century.

The blend of both whiskies was matured at the Chichibu distillery. Born of a desire for Japanese distilleries to be able to trade casks just like the Scottish ones do, the whisky was aged in a combination of ex-bourbon, American oak, and sherry casks. Limited to 10,200 bottles, this expression clocks in at 107 proof.

The nose is sweet with caramel, tropical fruit, and old oak notes. You'll find toffee and fruit on the pleasantly sweet palate with pineapple and a touch of ripe banana, culminating in a fruity finish with hints of brine.