Size750mL Proof86 (43% ABV)
Mount Gay XO was among the company's most famous rums. This Triple Cask Blend is a worthy successor that is distilled using a traditional column and double retort pot still. Matured in American whiskey, bourbon, and cognac casks, the blend contains rums aged between 5 and 17 years.
Notify me when this product is back in stock. 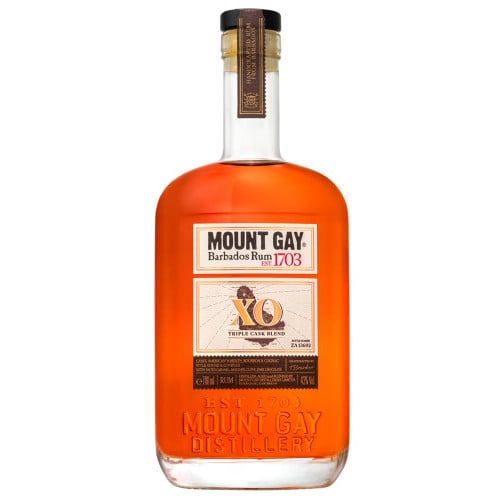 Today the distillery produces high-quality rum using the best ingredients, which includes coral-filtered water, a combination of naturally-occurring yeast and their proprietary strain. They employ a combination of pot and column stills, blending together the intense aromas and flavors of the first with the smoothness of the second. Over the past 4 decades, they have had 4 Master Blenders, the current one being Trudiann Branker. The spirit matures in American Whiskey, Bourbon, and Cognac oak casks, with others being brought in for various special editions. Mount Gay is home to the largest stock of aged rum in Barbados.

The Mount Gay XO Triple Cask Blend expression is the successor to their famous hit, the XO. The XO Triple Cask Blend is a small-batch reserve rum that is distilled using a traditional column and double retort pot still. It's a blend of a handful of meticulously selected mature rums that is matured in American whiskey, bourbon, and cognac casks. While they used to be aged 8 to 15 years, the numbers now stand between 5 and 17 years. It's a well-rounded and complex rum that fills its predecessor's shoes with ease, and then some.

There's vanilla, oak, coconut, fruit, spice, and a whiff of dark chocolate on the nose. The palate is smooth and creamy with notes of salted caramel, chocolate, baked figs, cloves, chocolate, and a hint of smoke. Finishes long and oaky.