Size750mL Proof86 (43% ABV)
Initially distilled and reserved only for Barbancourt family and friends, this well-known produit d'Haïti became notorious after being released for public sale for the first time ever in the mid 1960’s. 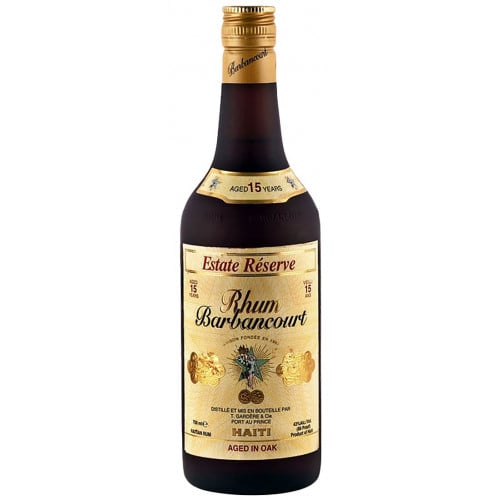 Rhum Barbancourt does things even more differently; they distill their rhum twice, to 90% ABV, after which it is reduced to about 50%, before being aged in a combination of large oak vats and smaller barrels. The Rhum Barbancout Estate Reserve is finally bottled at 43 % ABV.

Initially distilled and reserved only for Barbancourt family and friends, it was eventually released for public sale for the first time ever in the mid 1960’s, gaining much noteriety.

The flavors of this rum are very similar on the nose as they are in the glass, with butterscotch and toffee flavors accented by sandal wood and French Limousin oak. As a 15-year-old spirit, the more oaky notes that are to be expected in the flavor, are less prominent due to the use of large wooden vats to age a portion of the rhum. These large vats allow less interaction with the oak.

Also on the palate are flavors of rich fruit and baking spices. Caramelized brown sugars, and a dash of spices like cloves and cinnamon, with some marmalade and marzipan, and even a light smokiness of dark tobacco are all present.

Pick up a bottle of this special rhum today!

Rhum (French for Rum) Barbancourt is both distilled and bottled by Societe du Rhum Barbancourt, in Port Au Prince, on the Isle of Haiti. Founded in 1862, by Dupré Barbancourt, the company has been passed down through generations. The French spelling for for this Caribbean elixir may be off by one letter, However, the differences between Rhum and Rum are much more complex than this small grammatical twist.

The rum making traditions of the French West Indies, differ greatly from the rum traditions of the other colonized Caribbean countries. A key difference in ‘Rhum Agricole’ production is that it is distilled only once, to 70% ABV, from sugar cane juice as opposed to fermented molasses. Then it is brought down to bottling proof.
Explore all Barbancourt bottles >>

The nose is much like the palate, with flavors of rich fruit, caramelized brown sugars, dashes of baking spices like cloves and cinnamon. Some marmalade and marzipan, and even a light smokiness of dark tobacco are all present.