Ten To One Bundle

Size1500mL Proof80 (40% ABV); 90 (45% ABV)
Take everything you think you know about rum and pour it down the drain. And please, forget about pirates, too. Ten To One Rum is here to take everything that people think about rum and turn it on its head.
Notify me when this product is back in stock. 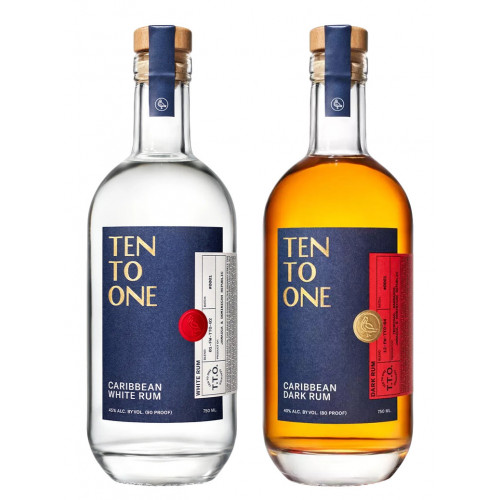 About Ten To One Bundle

Coming from Ten To One, a brand known for changing the perception of Caribbean rum, this bundle introduces you to two award-winning premium expressions, each garnering numerous accolades in their respective category.

First, we have their extra-proof expression, Ten To One White Rum, which is an unaged blend of Dominican column still rum and pot still Jamaican rum. It's finished in ex-bourbon casks and then filtered to remove the color. Without any additives, sugar, artificial color, or flavoring, this enticing rum delivers a clean, smooth finish and elevates any rum-forward cocktail to new heights. Designed for mixing, it was named the "Most Awarded Rum of 2021" with the title "Best of Class" and a Platinum Medal at the 2020 LA Spirits Awards.

"A beautiful white rum... much more complex than all the other white rums we’ve ever tasted."
Vinepair

"Excellent with a complexity and assertiveness of flavor that works wonderfully in a variety of cocktails."
Paste

Ten To One Dark Rum is a blend of 8YO Barbados and Dominican column still rums, a Jamaican pot still rum, and a Trinidadian rum. A beautifully complex blend, it’s aged in ex-bourbon casks and crafted without any additives, sugar, or artificial flavoring. Bottled at 80 proof, this exquisite blend was awarded Gold Medals at the SF World Spirits Competition and Sip Awards, respectively, as well as 93 Points by Wine Enthusiast.

""This is an extraordinary sipper and mixer…" not overly sweet with just a hint of that Jamaican rum funk hidden beneath the surface."
Esquire

Ten To One was founded and launched in 2019 by Caribbean son, Marc Farrell who was born and raised in Trinidad. Named after a phrase by Trinidad and Tobago's first Prime Minister, Ten To One is a brand that is "elevated, but not exclusive." Narrating a contemporary story of authentic Caribbean culture, the brand's goal stretches beyond simply bringing Caribbean rum to the US and global market, but rather reimagining rum and "broadening and challenging the current perception around rum and the occasions for which it might be considered the spirit of choice for today’s consumer," says Marc Farrell.

Ten To One Caribbean Dark Rum offers a fruity and spicy profile with banana, spice, apple, toffee, and nutty notes on the nose. There's toffee, nuts, vanilla, cinnamon, tobacco, and leather on the palate, along with a pleasant fruity sweetness. Caramel and spice linger through the dry finish.

Ten To One Caribbean White Rum greets with notes of pepper, jasmine, citrus, coriander, and lemongrass on the nose. The palate is citrusy and fruity with a prominent banana note and spice. It's a complex white rum that finishes warming with lingering fruit and spice.