Size750mL Proof80 (40% ABV)
Double-distilled from molasses using a traditional column and double retort pot still, this crisp and aromatic Barbados rum is aged in American charred ex-whiskey barrels before being bottled at 80 proof.
Notify me when this product is back in stock. 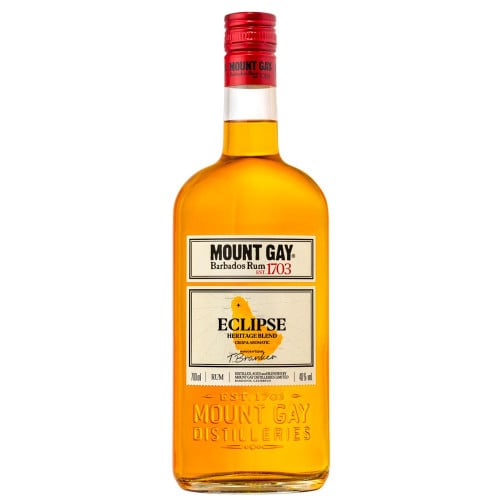 Today the distillery produces high-quality rum using the best ingredients, which includes coral-filtered water, a combination of naturally-occurring yeast and their proprietary strain. They employ a combination of pot and column stills, blending together the intense aromas and flavors of the first with the smoothness of the second. Over the past 4 decades, they have had 4 Master Blenders, the current one being Trudiann Branker. The spirit matures in American Whiskey, Bourbon, and Cognac oak casks, with others being brought in for various special editions. Mount Gay is home to the largest stock of aged rum in Barbados.

Mount Gay Eclipse is a showcase of their signature style. Crisp and aromatic, it's built on the body and aroma that Master Blender Trudiann Branker builds their expressions on. Named after the solar eclipse and the passing of Halley's comet in 1910, the Barbados rum is crafted with molasses that ferment for 3 days using in-house yeast, then distilled twice using a traditional column and double retort pot still, and aged in American charred ex-whiskey barrels.

There's an enticing fruity and floral nose with aromas of vanilla, banana, caramel, fruit, and spice. Medium-light bodied, the oak shines through the palate along with a subtle smokiness.