Be the first to review this product
Aged for 18 years, this rum was filtered with activated carbon to achieve the appearance of a clear rum while preserving all the rich flavors of an aged rum. Perfect for adding depth to any cocktail.
$22.99
Add to Wish List

Matusalem Rum has been distilled in Santiago de Cuba since 1872. Created by Benjamin and Eduardo Camp and Evaristo Alvarez, the brand was named after Matusalem from the Old Testament who lived up to be 969-years-old as Matusalem strives for timeless elegance beyond trends and a legacy to be passed down for generations. The most popular golden rum during Cuba’s Golden Age when many prominent artists resided on the island, Matusalem are pioneers in their field. Having introduced the Solera aging system, usually reserved for Spanish brandy and sherry wines, and dynamic aging where barrels are placed at different heights, their rums are of unmatched smoothness and taste. In 2015, a new production facility was established in the Dominican Republic where the microclimate is very similar to Santiago de Cuba.

On the looks of it, Matusalem Platino appears to be a white rum. In fact, it was aged for 18 months Solera style and then filtered with activated carbon to achieve the appearance of an unaged, white rum while still boasting all the rich flavors of an aged rum. Complex, creamy and extremely versatile, this is a molasses-based rum, which is evident on the nose as well. Expect flavors of maple and bourbon on the smooth palate. This is a fine clear rum that will add depth to any cocktail.

Aromas of molasses, spices, vanilla and burnt sugar on the nose. The palate is full of maple and bourbon flavors. A versatile clear rum to add depth to your cocktail. 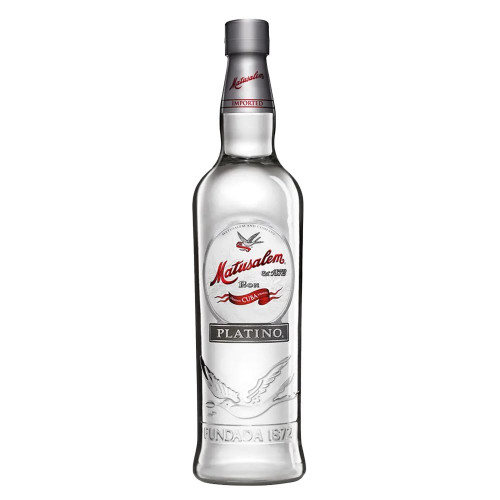