Size750mL Proof70 (35% ABV)
This spiced rum had country star Kenny Chesney work together with Master Blender Mike Booth. Crafted in the Caribbean, the 70-proof expression is rich with sugarcane and spice aromas and flavors.
Notify me when this product is back in stock. 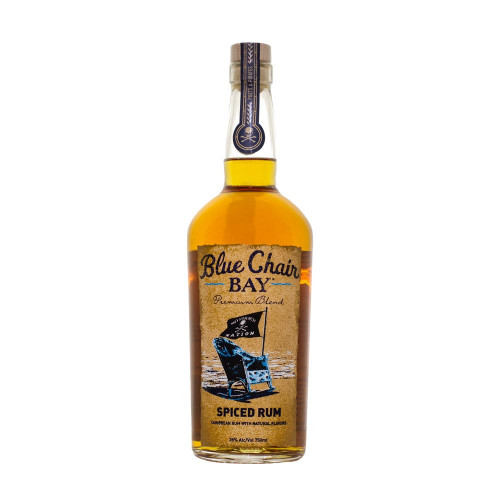 The American country music star Kenny Chesney is more than just an award-winning and chart-topping singer, musician, songwriter, and producer. He's an entrepreneur and a fan of rum as well. He channeled his love of the island lifestyle into Blue Chair Bay Rum, a brand that focuses on authentic Caribbean rum. The name comes from Chesney's song, titled "Old Blue Chair". The lyrics talk about his love of the islands and are featured on the bottle.

Chesney is the brand's owner and chief creative officer, while the rums were crafted with the help of one of the most skillful master blenders Mike Booth. The rum is crafted in the Caribbean from sugarcane molasses and natural ingredients. There are currently many expressions of Blue Chair Rum that include various flavored variants: Spiced, White, Coconut, Banana, Coconut Spiced, Vanilla, Key Lime Rum Cream, Banana Rum Cream, Pineapple Rum Cream, and Coconut Spiced Rum Cream. All the rums are gluten-free and have less than 99 calories per 1.5 oz serving.

It's the warm climate that makes rum mature faster, meaning that age statements play less of a role than in, say, whisky. Kenny wanted the fruit, spice, and sweetness to shine in Blue Chair expressions, so they found just the right balance of barrel aging, where some components have spent up to 15 months in ex-bourbon casks. This way, the oak doesn't overpower the delicate sugarcane flavors and aromas. The Spiced Rum is bottled at 70 proof and plays very well with cocktails.

Get your bottle of this spiced rum today!

The aroma is tropical with fruit, vanilla, and cinnamon. On the palate, you'll find a sweetness that isn't overbearing, caramel, vanilla, cinnamon, and nutmeg. The finish is pleasantly sweet with spice notes.