Caskers Rewards members earn up to 3 store points back when buying this bottle.
Size750mL Proof136 (68% ABV)
Bottled at 136 proof, this absinthe is made according to processes and formulas that were taken from early French distilling treatises.
Notify me when this product is back in stock. 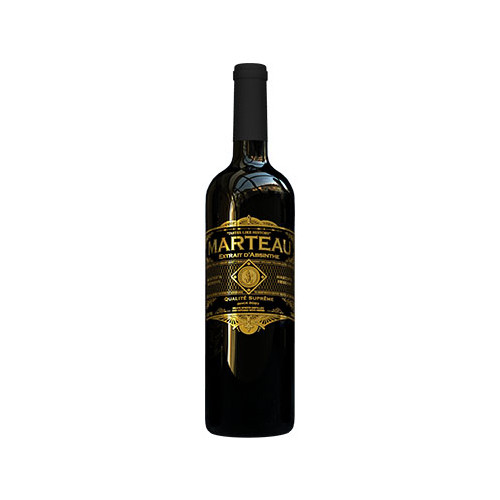 Spurred by the temperance movement and winemakers, absinthe became associated with hallucinogenic effects. One critic claimed that absinthe would "make you crazy and criminal,"and that it would "provoke epilepsy and tuberculosis." In 1905, Swiss farmer Jean Lanfray murdered his family after consuming considerable quantities of wine, brandy and two glasses of absinthe. While Langfray had a history of alcoholism, Swiss teetotalers seized the moment and passed a referendum making absinthe illegal. Absinthe was likewise prohibited in the United States from 1912 until 2007.

Marteau Black Label Master's Reserve Extrait D'Absinthe is crafted by world renown absinthe-expert Gwydion Stone according to 19th century processes and formulas that were taken from early French distilling treatises. Prior to the rising cost of grapes caused by a decades-long phyloxera vine blight in the middle of the 19th century, genuine French absinthes were made from a grape-based spirit. During the blight, most absinthe-producers turned to inexpensive beet and potato-based spirits in order to craft absinthe. The finest absinthe brands continued to use traditional grape-based spirits, however. Marteau Black Label Absinthe is made from a grape-based spirit, and is infused with a secret blend of botanicals including Artemisia absinthium wormwood, aniseed, fennel seed, and Artemisia pontica (this is also known as petite wormwood).

The absinthe has an aroma of chili peppers, anise, mint and herbs. The addition of water creates a beautiful louche, and results in notes of mint, fennel and licorice on the palate. The finish is long and lingering, with a touch of heat and green leafy herbs.

Aroma of chili peppers, anise, mint and herbs. Addition of water creates a beautiful louche. Notes of mint, fennel and licorice on the palate. Finish is long and lingering, with a touch of heat and green leafy herbs.