Be the first to review this product
Distilled from classic ingredients, this absinthe was named the top absinthe in the world at the Ultimate Spirits Challenge in 2014.
$69.99
Add to Wish List

Absinthe, which is a spirit traditionally derived from Grande Wormwood, anise and fennel, has a long and colorful history. While its origins remain unclear, the use of medicinal wormwood dates back to ancient Egypt. In the 18th and 19th centuries, absinthe was distributed by the French Army to its troops as a cure for several digestive diseases, including dysentery and tropical fever. When the troops returned home, they brought their taste for absinthe with them. The popularity of absinthe grew, particularly among bohemian artists and writers such as Ernest Hemingway, Vincent van Gogh and Oscar Wilde, all known to be absinthe drinkers.

Spurred by the temperance movement and winemakers, absinthe became associated with hallucinogenic effects. One critic claimed that absinthe would "make you crazy and criminal," and that it would "provoke epilepsy and tuberculosis." In 1905, Swiss farmer Jean Lanfray murdered his family after consuming considerable quantities of wine, brandy and two glasses of absinthe. While Lanfray had a history of alcoholism, teetotalers seized the moment and passed a referendum making absinthe illegal; it was not until 2007 that absinthe was allowed to be legally sold again.

On March 5, 2007, Lucid Absinthe Supérieure became the first genuine absinthe to be legally available in the United States in nearly a century.

A traditional French absinthe, it is made from Grande Wormwood (artemisia absinthium), European green anise and sweet fennel, along with a secret recipe of other whole herbs and spices (the absinthe is never cold mixed from industrial extracts or steam distilled essences or oils). In addition, the absinthe receives its traditional green color directly from the whole herbs used in the recipe; it is not colored with artificial colorants or chemicals as are some other verte-absinthes, and no sugar is added following distillation.

Lucid Absinthe has a strong aroma of anise, cumin, fennel and sage that gives way to notes of roasted peanuts, walnuts, pine and salty tang on the palate. The finish is complex and lingering, with a touch of anise and fennel. The absinthe earned a score of 90 points at the Ultimate Spirits Challenge, which named it the top absinthe in the world.

Lucid Absinthe Supérieure is certified kosher by the Kashruth division of the Orthodox Union and is gluten-free.

Strong aroma of anise, cumin, fennel and sage. Notes of roasted peanuts, walnuts, pine and salty tang on the palate. Finish is complex and lingering, with a touch of anise and fennel 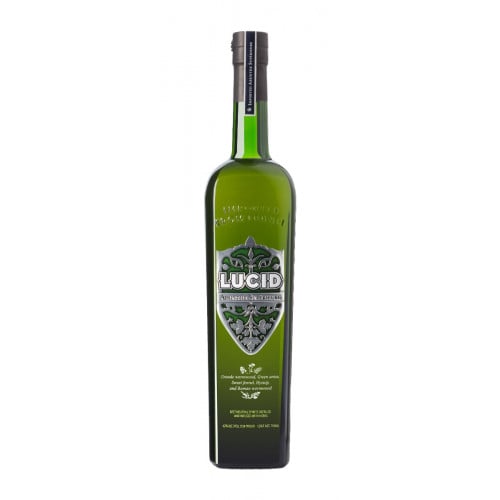