Size750mL Proof112 (56% ABV)
Distilled by one of the most innovative distilleries in the United States, this traditional spirit is made with a modern twist. 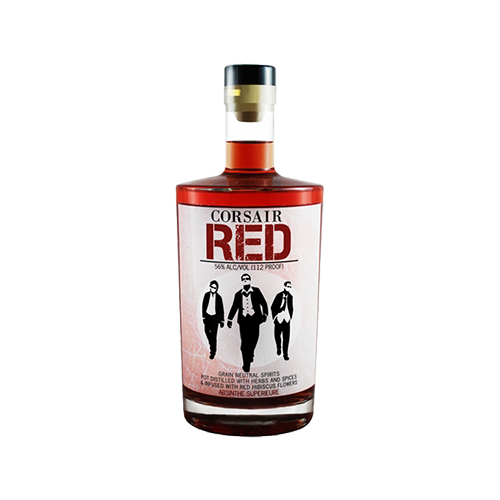 Spurred by the temperance movement and winemakers, absinthe eventually became associated with hallucinogenic effects. One critic claimed that absinthe would "make you crazy and criminal,"and that it would "provoke epilepsy and tuberculosis." In 1905, Swiss farmer Jean Lanfray murdered his family after consuming considerable quantities of wine, brandy and two glasses of absinthe. While Lanfray had a history of alcoholism, Swiss teetotalers seized the moment and passed a referendum making absinthe illegal. Similarly, absinthe was prohibited in the United States for nearly a century; from 1912 until 2007, absinthe was not allowed to be consumed on American soil.

Corsair RED Absinthe is a unique interpretation on the classic green spirit. "Our company got going about the same time the U.S. ban was lifted, so it was one of those things where we said we could make a little and people would come and want to know about it," says Andrew Webber, the co-founder of Corsair Artisan Spirits. "It's one of the most uncommon absinthes made in the world, so people have found use for our product, and it has its own uses in mixology."

Corsair RED is made using traditional absinthe ingredients, but is tweaked with some unusual additions, including citrus, tarragon, dragon wormwood (a relative of grand wormwood) and red hibiscus flowers. "We think of a good spirit as something like a musical chord made up of several notes," says Webber, noting that Corsair originally envisioned creating a more traditional absinthe. "Our early batches were missing a note in the chord. But when we added hibiscus, everything clicked." The hibiscus flowers give the absinthe its unusual red color, and add a floral note to the palate that is complemented by tangy citrus, herbal undertones and a spicy, peppery finish.

Once the absinthe has been distilled, each bottle is filled, labeled and boxed by hand — Corsair's small operation has no mechanized components. "We make less in a year than a big distillery spills in a day," says Clay Smith, Corsair's distillery manager. "Our products are extremely small batch, meaning that our largest run is 550 bottles."

Pick up one of the most unique absinthes made today!

Aroma of sweet hibiscus with subtle undertones of herbs and spicy pepper. Initial flavors are slightly floral, with bursts of tangy citrus and herbal undertones that lead to a spicy, peppery finish.