NOTE:
Vintage may vary.
Aged for 14 years, this Distillers Edition single malt whisky is finished in used Montilla Fino sherry casks.
Notify me when this product is back in stock. 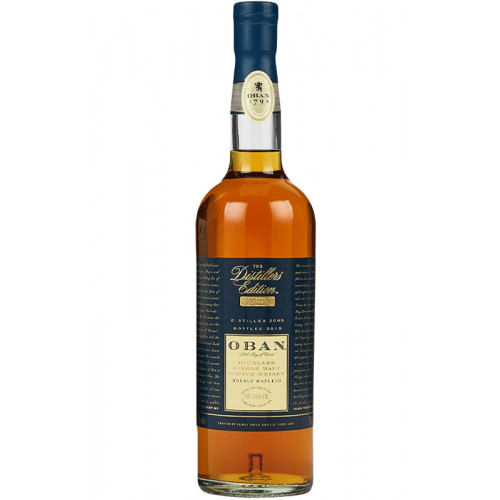 Following distillation, Oban Distillers Edition Single Malt Whisky is aged for 14 years in oak casks. During this beauty rest, the whisky is touched by its environment and geography — the warm, salty Gulf Stream and mild, temperate climate of Oban are reflected in the whisky. After its initial maturation, the whisky is double-barreled, or finished, in ex-Montilla Fino sherry casks. The sherry casks add notes of dried fruits, particularly cherries and strawberries, to the whisky, and complement its notes of light, peaty smoke.

Oban Distillers Edition Single Malt Whisky has a fruity nose, with hints of grapes, citrus and a touch of smoke. The flavor is full and rich, with complex notes of tangy salt, butterscotch, caramel and toffee, which ultimately lead to a lingering, smoky and sweet finish. Oban is situated at the frontier between the Western Highlands and Islay of Scotland — the whisky has the lighter, sweeter notes of Scotland's Highlands region, while still possessing the dry, smoky style of Islay.

Fruity nose with hints of grapes, citrus and smoke. Flavor is full and rich, with complex notes of tangy salt, butterscotch, caramel and toffee, which ultimately lead to a lingering, smoky and sweet finish.