Size750mL Proof80 (40% ABV)
This 10YO single malt is the “original Laphroaig,” the real McCoy, distilled the fashion as Ian Hunter invented it nearly 8 decades ago. It is a beautifully savory whisky, the unadulterated classic essence of Laphroaig.
Notify me when this product is back in stock. 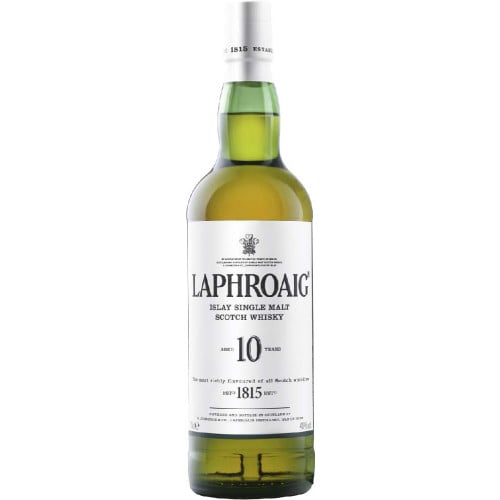 It was through a fortuitous sequence of events that Laphroaig came into existence. In 1815, Donald and Alexander Johnston leased 1,000 acres of land on the island of Islay. Their intent was to raise and sell cattle on the land and as a result, they began growing barley to be used as feed for their livestock. Following a particularly bountiful harvest, the brothers distilled the excess grains they had grown into whisky, and sold it to the inhabitants of the island. Soon thereafter, the brothers found it more profitable to distill whisky than to raise cattle, and Laphroaig (pronounced La-froyg) Distillery was born.

Laphroaig Single Malt Whisky is one of the most flavorful and intense whiskies made anywhere in the world. During Prohibition, it was one of the few whiskies still legally imported into the United States, as it was considered a medicinal spirit. Laphroaig Single Malt is made from the finest Scottish barley, which is malted at the distillery and dried over a peat flame. Unlike other distilleries which source peat from the Scottish mainland, the peat used to smoke Laphroaig barley is made from the heather, mosses and lichens of Islay and adds a distinct iodine-like flavor to the whisky.

Laphroiag’s 10YO single malt is the “original Laphroaig,” the real McCoy, distilled the fashion as Ian Hunter invented it nearly 8 decades ago. It is a beautifully savory whisky, the unadulterated classic essence of Laphroaig. “Those enjoying the 10 Year Old will first notice the bold, smoky taste, followed by a hint of seaweed and a surprising sweetness. This full-bodied variant is the foundation of all Laphroaig expressions and comes with a long finish.”

The nose has great smoky, seaweedy, “medicinal"" notes with a hint of sweetness. In the mouth it is full bodied, surprisingly sweet with hints of salt and peaty layers. The finish is lingering.