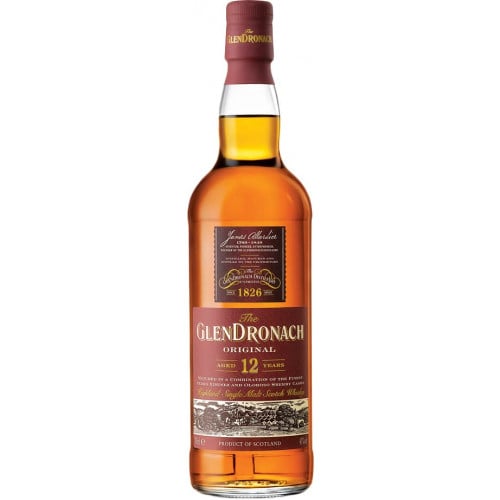 The year is 1826, the Temperance Society had just been formed in Boston, Beethoven’s Quartet No. 13 is premiered in Vienna, the combustable engine is being patented, and deep within the Scottish Highlands, in the land of peat and bagpipes, the GlenDronach distillery is being born. GlenDronach got its start shortly after the Excise Act of 1823, when James Allardice became the second person to apply for a license to distill Whisky in Scotland. Ever since, the iconic Scottish distillery has been under the ownership of several well-known names in Scotch, namely; Walter Scott, Captain Charles Grant, and William Teacher and Sons.

This extraordinary 12-year-old single malt was re-launched in 2009. The whisky is aged in in ex-sherry casks only (a mixture of different sherry casks). Non-chill filtered, this naturally colored Scotch is aged for a minimum of 12 years, in a combination of the “finest Spanish Spanish Pedro Ximenez and Oloroso sherry casks...bottled at 43%, the GlenDronach 12 year old Original is a sweet, creamy dram” (Glendronach). With warm, rich oak and classic sherried notes, this single malt is a quintessential GlenDronach.

On the nose are sweet, creamy vanilla, with hints of ginger. Spiced mulled wine and pear. The palate is rich, creamy, silky-smooth with warm, rich oak and sherry sweetness, full mouth feel, raisins and soft fruits. Flavors transition to spicier notes of medium length and a dry end. The finish is long, full, firm, and slightly nutty.

4.4 out of 5
(3 reviews)
Write a review
Real email address is required to social networks
Sign in
Login with Google
Login with Facebook
Or
We also recommend