This product is available in: CA, FL, NE, NH Unfortunately, we can't ship to PO Boxes and APO addresses.

Size750mL Proof130 (65% ABV)
This American-style absinthe received a perfect 5/5 rating from Difford’s Guide.
Notify me when this product is back in stock.

This product is available in: CA, FL, NE, NH Unfortunately, we can't ship to PO Boxes and APO addresses. 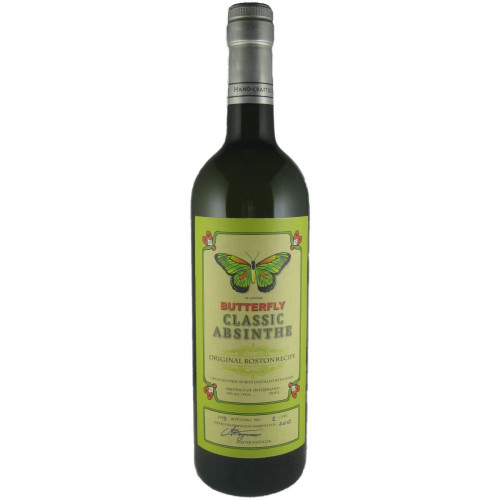 First produced in Boston, MA in 1902, Butterfly Absinthe was originally the product of P. Dempsey Co., the eponymous company founded by Irish immigrant Patrick Dempsey. While Dempsey spent his earlier years bouncing between various professions — first a textile mill laborer, Dempsey later worked on building the Erie Canal — he eventually found his calling when, in 1846, he rented a basement apartment in Lowell, MA and began brewing and bottling his own root beer.

Meanwhile, during the latter half of the 19th century, absinthe was growing enormously in popularity in the United States. While most absinthe was imported from France and Switzerland, domestic production increased to meet surging demand, and with that shift came a new, “American” style of absinthe all its own. This new style utilized mint and other readily-accessible herbs, and gave the absinthe its unique color and flavor.

Prohibition ultimately led to a ban on the production of absinthe in the United States, which stayed in effect until the Alcohol and Tobacco Tax and Trade Bureau changed its viewpoint on absinthe in 2007. It was at that time that American absintheur, Brian Ferald, resurrected Patrick Dempsey’s old Butterfly Absinthe recipe and resumed sales of the spirit in 2010.

Butterfly Absinthe has a delicate aroma of citrus and spice, with additional floral and earthy lemon notes. The palate is bold and sweet, with touches of anise, fennel and mint, and leads to a finish marked by a lingering, peppery spice.

Butterfly Absinthe received a perfect 5/5 score from Difford’s Guide, and an “A” rating from Drinkhacker.com. Pick up a bottle today!

Delicate aroma of citrus and spice, with additional floral and earthy lemon notes. Palate is bold and sweet, with touches of anise, fennel and mint, and leads to a finish marked by a lingering, peppery spice.