Learn more
Size750mL Proof130 (65% ABV) *Please note that the ABV of this bottle may vary
Made in the shadow of the Jura Mountains, this absinthe is one of the most highly decorated spirits ever.
Notify me when this product is back in stock. 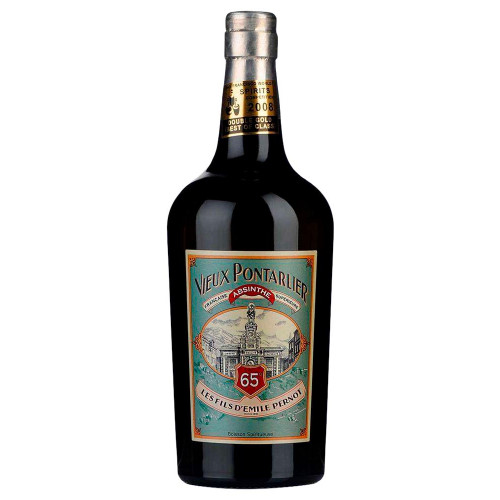 Prior to the Napoleonic Wars in the early 19th century, the French Army distributed absinthe to its troops as a to cure to several digestive diseases, including dysentery and tropical fever. Following the end of the wars, the troops returned home and brought their taste for absinthe with them. The custom of drinking absinthe, which traditionally has a natural green color and is often called la fée verte (the "green fairy"), became so popular in French cafés that the hour of 5 p.m. was called l'heure verte (the "green hour").

In 1890, the Emile Pernot Distillery was founded in the city of Pontarlier, which is situated in the shadow of the Jura Mountains. At the time, the city's twenty-two distilleries were known for producing the finest absinthe in the world — Pontarlier's alpine climate provided the distilleries with exclusive access to herbs and spices available nowhere else. Following the French ban on absinthe in 1915, however, only two distilleries in the city survived — each a testament to an industry that once dominated the region.

Vieux Pontarlier Absinthe Française Supérieure continues to be crafted in the city of Pontarlier using the distillery's original absinthe recipe. The absinthe is made from locally-grown Artemisia Absinthium (a type of wormwood), which is considered to be the finest in the world. In addition, the distillery uses green anise seeds and provençal fennel seed, together with a secret blend of other aromatic herbs and spices, in crafting the absinthe. Faithful to its original recipe, no artificial colors or sweeteners of any kind are added.

Vieux Pontarlier Absinthe Française Supérieure has a medium green color, along with an aroma of bright anise, alpine herbs and light wormwood. The aroma gives way to intense notes of spices, herbs, mint and wormwood on the palate, before finishing with a touch of anise and fennel.

Vieux Pontarlier Absinthe Française Supérieure is one of the most highly decorated spirits in the entire world. It earned a score of 92 points at the Ultimate Spirits Challenge, and a score of 94 points from Wine Enthusiast. In addition, it earned five stars from F. Paul Pacult's Spirit Journal, which called it "the gold standard for the absinthe category." It also was rated one of the five best absinthes by Esquire, which said it was simply "as good as it gets."

Aroma of bright anise, alpine herbs and light wormwood. Intense notes of spices, herbs, mint and a burst of wormwood. Finishes with a touch of anise and fennel.